The last of the daily monastic offices: compline

The ancient daily office of compline is prayed modernly by Eastern Orthodox, Roman Catholic, Anglican, Lutheran and other Christian communities. How much do you know about this form of daily prayer?

Share on Facebook
Share on Twitter
Share by E-Mail
Author
FatherSteve
Time
4 mins
Type
Multiple Choice
Quiz #
365,522
Updated
Jan 11 23
# Qns
10
Difficulty
Average
Avg Score
6 / 10
Plays
724
Awards
Top 35% Quiz
This quiz has 2 formats: you can play it as a or as shown below.
Scroll down to the bottom for the answer key.

Quiz Answer Key and Fun Facts
1. The English word "compline" is derived from a Latin word. Which of the following is its source?

There is a sense in which chanting compline "completes" the day of a monk or nun who arose to the first prayers of the day and now retires to bed with the last. Compline is sometimes also spelled "complin" in some older texts.
2. Historical liturgists are not of one mind as to the origins of compline. There is some evidence of something like compline as early as the late 4th century in the Eastern Church. Who is considered the early-6th-century originator of compline in the West?

Benedict is revered as the Father of Western Monasticism. His Rule prescribes the balance between worship and work, with particular attention to the daily orders of prayer. The Rule is followed today by Roman Catholic and Anglican Benedictines.
3. In the normal monastic scheme, when is compline prayed?

A chapter in Umberto Eco's masterful novel "The Name of the Rose" is entitled "After Compline" which suggests that the events in it occurred after the 14th-century Italian Benedictine monks in the story had gone to bed.
4. The canticle most commonly associated with compline is the "Nunc dimittis" which begins "Now, Lord, letteth thou thy servant depart in peace ..." This is a quotation from Luke 2:29-32. Who is being quoted?

The English title for this canticle is "The Song of Simeon." According to Saint Luke, Simeon was an old man of Jerusalem who had been promised by the Holy Spirit that he would not die until he had actually seen the Messiah. When Joseph and Mary brought Jesus into the Temple at Jerusalem to be dedicated, Simeon recognized the Baby Messiah and spoke these verses, indicating that the promise was fulfilled and he was ready to die.
5. All of the various daily offices included psalms, short readings from Holy Scripture, hymns and fixed prayers. What were the building blocks, the core of the offices, around which all the rest was structured?

Saint Benedict's Rule so organized worship that all 150 psalms were recited at least once in every week. This provided variety in some of the offices but compline always included Psalm 4 ("I lie down in peace; at once I go to sleep"), Psalm 90 ("like a watch in the night") and Psalm 134 ("you that stand by night in the house of the LORD"), according to Chapter 18.
6. A sentence of scripture (1 Peter 5:8-9) is commonly read aloud in many versions of compline, especially the more traditional ones. Complete this line from Saint Peter's epistle in the King James Version: "Brethren, be sober, be vigilant; because your adversary the devil, as a __________________, walketh about, seeking whom he may devour: whom resist, steadfast in the faith."

Saint Peter draws on Old Testament imagery to compare the Devil to a lion on the prowl (Psalm 22:13; Amos 3:8; Proverbs 30:30). Early Christians might have remembered that the Prophet Daniel was condemned to be eaten by lions (Daniel 6:16-28). The person praying the office is reminded that the Devil may attack at any time and is just as dangerous.
7. In the traditional Western order of daily offices, where does compline fit?

According to Chapter 16 of the Rule of Saint Benedict, the seven daily prayer offices are lauds, prime, terce, sext, none, vespers, and compline. The number comports with Psalm 119:164 which says "Seven times a day do I praise thee because of thy righteous judgments." (KJV)
8. In many monasteries (and on retreats based on the Rule of Saint Benedict), the Great Silence immediately follows the end of compline. What is the Great Silence?


Answer: a time when no one may speak save for grave necessity

In Chapter 43 of his rule, Saint Benedict wrote "let them say Compline, and after going out from Compline, let there be no more permission from that time on for anyone to say anything." During the Great Silence, no one speaks until the start of the morning liturgy the next day.
9. In Eastern Orthodox practice, there are two sorts of compline -- called Great Compline and Small Compline -- which differ significantly.

Small Compline is used most nights of the year. On the eves of very special feasts (e.g. the Nativity, the Epiphany and the Annunciation) Great Compline is prayed. In contrast to Small Compline, the church choir sings at Great Compline. In some places and under certain circumstances, Small Compline can be led by a lay person, even in a home rather than a church building.
10. Compline was prayed regularly in England until the 16th century. What happened to compline, as a consequence of the English Reformation?


Answer: It was melded into one service called Evening Prayer or Evensong.

Archbishop of Canterbury Thomas Cranmer took elements of both vespers and compline, particularly as they were said at Salisbury Cathedral, and combined them into a single evening office in the Book of Common Prayer (1549). Compline never completely disappeared and was reintroduced as a distinct service in many churches of the Anglican Communion in the 20th century.
Source: Author FatherSteve

This quiz was reviewed by FunTrivia editor CellarDoor before going online.
Any errors found in FunTrivia content are routinely corrected through our feedback system.
Most Recent Scores
Dec 23 2022 : Guest 5: 9/10
Dec 17 2022 : golfmom08: 6/10 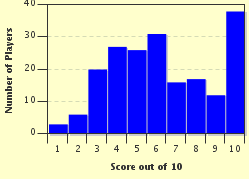