No unknowns about one of the most well-known Old Testament Bible stories? Guess again. This quiz will challenge your knowledge of Noah and the events in his life. Any and all quotations from the NIV version.

Quiz Answer Key and Fun Facts
1. Who was Noah's father?

Lamech, Noah's father, named him Noah because he said that the boy would comfort him in the labor and painful toil that he had to endure because the Lord had cursed the ground (Gen. 5:29). The reason the Lord cursed the ground? Check out Genesis 3 for that answer.
3. What were the names of Noah's three sons?

Noah and his wife had their three sons after Noah was 500 years old (Gen. 5:32). They married and had many children, some of whom built famous Bible cities such as Nineveh and Babylon (check out Genesis 10:1-20).
4. Why did God command Noah to build the ark?


Answer: Because God wanted to save Noah's family and the animals from the flood

God sent the flood to destroy the earth, because it was so wicked that He regretted ever creating man. However, He singled Noah out to save because He saw that Noah was righteous and followed His commands. Also, he used Noah to save the animals so that there would be life in the "new" world after the flood.

See Genesis 6:5-9.
5. How many animals of each kind did God tell Noah to bring onto the ark?

Contrary to popular belief, God really did specify different numbers for different animals. Noah was to bring two of every unclean animal onto the ark, but SEVEN of every clean animal. God also told Noah to bring seven of every kind of bird.

Reference: Genesis 6:19-7:3
6. A week before the flood began, God gave Noah a specific warning about when the waters would come.

Right after commanding Noah what numbers of which kinds of animals to take onto the ark, God told him that in seven days He would send rain on the earth for forty days and forty nights (Genesis 7:4).
7. What was the date (according to the Hebrew calendar) when God sent the floodwaters on the earth in order to wipe out all mankind?


Answer: The seventeenth day of the second month

The flood began in the six hundredth year of Noah's life. The 17th day of the 2nd month (Genesis 7:11) translates from the Hebrew calendar to the Gregorian calendar as early to mid November.
8. What was the order that Noah sent out birds to look for dry land?

When Noah saw that the rain had stopped and the floodwaters seemed to be receding, he sent out a raven to find dry ground. The raven never returned, but kept flying back and forth until the water had dried up from the earth. Noah then sent out a dove, which returned to him empty-beaked.

A week later, Noah sent the bird out again. It returned to him with an olive branch in its mouth, a sure symbol that the floodwaters were drying up. The last time Noah sent out the dove, it didn't return. The "bird saga" can be found in Genesis 8:6-12.
9. What was the first thing that Noah did after he got out of the ark?

Noah knew that the most important thing was to thank God. In fact, it was after his sacrifice that God promised never again to destroy the earth by a flood. The rainbow - the reminder of His promise - still graces the sky today.

See Genesis 8:18-22, 9:8-16.
10. Most people know that the story of Noah and the flood is found in the book of Genesis. However, do you know what chapters his story is found in (excluding his genealogy)?

Noah's genealogy is found in the end of Genesis 5, and the genealogy of his sons is found in Genesis 10. However, the story of the flood and the events surrounding it occupy chapters 6 - 9.

There is a lot more to Noah's story, but hopefully now there are fewer unknowns in your mind about what happened to him and his family! Hope you enjoyed the quiz and learned something!
Source: Author china_girl

This quiz was reviewed by FunTrivia editor CellarDoor before going online.
Any errors found in FunTrivia content are routinely corrected through our feedback system.
Most Recent Scores
Jan 09 2023 : cecil1: 5/10
Dec 14 2022 : Guest 174: 7/10 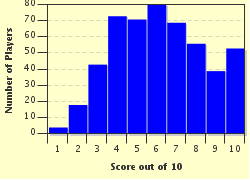 
Other Destinations
Explore Other Quizzes by china_girl