Good, Evil, and Sin: The Wicked Story of Sodom Quiz

Sodom, that wicked city of the Old Testament, has a salacious story filled with evil and sin as well as acts of goodness that shine through. Answer the following about this city and its story (King James Bible version in use.)

Quiz Answer Key and Fun Facts
1. This story begins with God bargaining with a Biblical patriarch to see if God will spare or smite the wicked city. Which patriarch begs God to consider leniency?

Abraham is the uncle of Lot, a good man living in the otherwise thoroughly wicked city of Sodom, and for the sake of his nephew pleads with God to consider the possibility of good people living there rather than send down judgment immediately. In Genesis 18:18, God decides to tell Abraham what he will do in Sodom rather than conceal his plans, due to Abraham's relationship with God as the father of the Jewish people.
2. God starts out his judgment by sending messengers to Sodom; who does he choose for this particular journey?

God's messengers are angels in the form of human travelers, who seek out hospitality and goodness in Sodom. They are sent in Genesis 19:1, and are woefully disappointed by the overall city, but find hospitality and generosity in the home of Lot, Abraham's kinsman.
3. A mob attempts to assault God's messengers while they stay at Lot's house in Sodom, but they are stopped by what divine punishment?

God's messengers are too difficult for the mob in Sodom, and with their divine powers strike the would be attackers with a supernatural blindness in Genesis 19:11. This blindness kept them from carrying out their plans to "know" (sexually assault) Lot's visitors - which they were previously determined to do, to the point of turning down the offer of Lot's daughters as substitutes.
4. God's messengers were trying to find a certain number of righteous people in Sodom, which would have nullified God's punishment of the town. How many people?

Abraham had pleaded God down to this agreement: if only ten righteous people lived in Sodom, he would spare the city, as he agreed in Genesis 18:32. God sent the angels specifically to see if such a number was present, but they found that it was not so.
5. How many people did God save from the city of Sodom before its final judgment?

God saved Lot, Lot's wife, and Lot's two daughters from the impending destruction of Sodom in Genesis 19:15, where the angels wake Lot to the news of the impending doom. Lot's daughters had intended husbands, but they did not believe in the tales of doom and stayed behind. These four were led out of the city in time to escape.
6. What command did God give the people he allowed out of Sodom, as the only condition of their safe exit?


Answer: Do not look back at the city

God instructed Lot and his family to not look back upon the city if they wanted to escape with their lives in Genesis 19:17. This recalls the Greek myth of Orpheus where Orpheus was unable to look back at his wife when leaving the Underworld with her, and it had likewise disastrous results for the person incapable of resisting that pull back.
7. What punishment does God visit upon the person who does not fulfill his post-Sodom commandment?

Lot's wife can't help but look back on her lost city in Genesis 19:26, and as punishment for her transgression, she is turned into a pillar of salt. God tends to be very precise and demanding when it comes to his direct instructions in the Old Testament!
8. What punishment did God visit upon the city of Sodom itself?


Answer: Devastation by fire and brimstone

The city of Sodom is burned into nonexistence by fire and brimstone in Genesis 19:24. The other Biblical plagues of "death of the first-born," and "deadly famine" are present in Exodus (it's the final plague of Egypt) and late Genesis (Joseph's dream foretells the famine and mitigates the disaster), but do not figure into the Sodom story.
9. Which sinful city was destroyed alongside Sodom in the Genesis account?

Gomorrah was the sister city of Sodom and likewise wicked. It too was destroyed by fire and brimstone in Genesis 19:24. Nineveh was the wicked city that Jonah the prophet was sent to save and tried to skip out on when he was swallowed by the whale/fish creature, and both Antioch and Damascus figure in later Biblical accounts.
10. What apparently sinful act do Lot's daughters commit when they find that there are no men available anymore to marry them?


Answer: Get their father drunk and force him to father their children

Let no one accuse the Bible of being uninteresting; this is something even too shocking for "Game of Thrones" and it's right out of the first book of the Bible. Lot's daughters are distraught over the thought of missing out on childbearing so they use the only man in the vicinity to help them on their quest for children, which they bear in Genesis 19:36.
Source: Author merylfederman 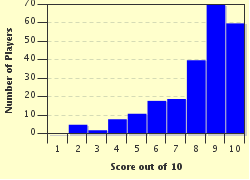