Genesis: In the Beginning, Finally! Quiz

Starting with chapter 37, this wraps up my study of Genesis. I used the New American Standard Bible as my guide. Hope you enjoy this one!

Quiz Answer Key and Fun Facts
1. How much did Joseph's brothers receive for selling him to the Ishmaelites?

After the brothers decided to place Joseph into a pit instead of killing him, Judah talked the group into selling him to the Ishmaelites. After they sold him for 20 shekels of silver, they took his tunic, dipped it in goat's blood, then gave it to their father. He thought his son had been killed by a wild beast. The Ishmaelites then in turn sold him into Egypt. (Genesis 37:27-33)
2. Of Pharaoh's officers, who purchased Joseph from the Ishmaelites?

The Ishmaelites sold him to Potiphar. He was the captain of Pharaoh's bodyguard. (Genesis 37:27-36, 39:1)
3. Joseph was imprisoned in Egypt based on a woman's lie.

Joseph's master's wife tried to seduce Joseph on several occasions but he always refused. After finally feeling rejection, she lied to her husband, Joseph's master, and said Joseph tried to seduce her and that he fled when she screamed. He sent Joseph to jail. (Genesis 39:7-23)
4. In Joseph's first dream interpretations while in jail, who was to be hanged?

The chief baker dreamed he had three baskets of bread on his head with birds eating from the baskets. Joseph interpreted that the three baskets were three days and that he would hang on the third day. He further said that the birds would eat his flesh. (Genesis 40:16-19)
5. What did Joseph interpret Pharaoh's dreams of cows and corn to mean?

Pharaoh dreamed of seven fat cows and seven gaunt cows. He had a second dream of seven full ears of corn and seven thin ears of corn. Joseph said the dreams meant the same thing. The seven plump cows/corn were seven years of abundance, while the seven thin cows/corn were seven years of famine. Further, because both dreams were the same, the events would come fast and Pharaoh needed to prepare for the famine during the abundant years. (Genesis 41:25-36)
6. When Jacob sent his sons to Egypt for food, which son stayed behind with him?

Benjamin was the youngest son but also the only son Jacob had left by Rachel. Joseph was the other son by Rachel but Jacob thought he was dead. Because of this, he kept Benjamin behind as he sent his other sons to Egypt for food during the famine. (Genesis 42:1-5)
7. Joseph sent all of his brothers back to retrieve the brother left behind with their father Jacob.

Joseph recognized his brothers when they came to buy food but they didn't recognize him. Because of his dreams about his brothers, he said that they were spies. He wanted to see the brother they said that was left behind with their father. He told them to go back and bring their other brother to him to prove they weren't spies.

He kept one brother, Simeon, and sent them back to Jacob with grain and the money that they used to purchase the grain with orders to bring back the other brother. (Genesis 42:8-28)
8. After Joseph was sold into Egypt, Jacob never saw Joseph again before his death.

After Joseph revealed himself to his brothers, he sent them back to their father. He instructed them to bring Jacob and all of their households to Egypt because there were five more years of famine to endure. They did as they were instructed and Jacob spent his last years in Egypt. (Genesis 45:1-28, 46:30)
9. As Jacob was telling his sons of what awaited their future, which son was described as a lion's whelp?

Judah was the lion's whelp. Dan would judge his people. Issachar was a strong donkey. Naphtali was a doe with beautiful words. (Genesis 49:1-21)
10. Jacob was buried in Egypt.

Jacob died in Egypt but was taken back to the land of Canaan and was buried in the cave at Ephron's field where Abraham, Sarah, Isaac and Rebekah were buried. (Genesis 49:29-33, 50:13)
Source: Author jaknginger 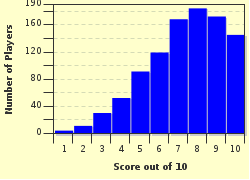