The Patriarchs did WHAT?! Trivia Quiz

Genesis is full of great people who did very questionable things. Here are questions about ten of them.

Quiz Answer Key and Fun Facts
1. When Abram and Sarai (who later became Abraham and Sarah) came to Egypt, Abram said Sarai was his sister, not his wife. He was afraid that if he told the truth, he would be killed. What happened next?

Abram was indeed Sarai's brother as they shared the same father. Pharaoh's people showered Abram with gifts to get her to become a part of Pharaoh's household - that is believed to be an euphemism for joining the harem. However, G-d sent the plague onto the Pharaoh's house until the latter realized the truth of the matter, restored Sarai to Abram, and sent the couple away.

Interestingly enough, Genesis then repeats a very similar story twice - about Abraham and Sarah, and then about Isaac and Rebecca.
2. Lot's wife was rather famous for becoming a pillar of salt. But what odd thing did Lot's daughters do?


Answer: They got their father drunk and made him "lie with them" while he was drunk.

After escaping from Sodom, Lot lived in remote mountains with his daughters. At some point, they realized they had no chance to marry and have children. They then got their father drunk and "lay with him" on two consecutive nights. The sons they conceived fathered nations that became enemies of Israelites - Moabites and Ammonites.
3. When Sarah believed she would never have a child, she suggested Abraham take on Hagar as a concubine to produce a legitimate heir. However, when Sarah did after all have a son, she turned against Hagar. What did Abraham and Sarah do to Hagar?


Answer: Sent her away.

When Sarah told Abraham she wanted to send away Hagar and her son Ishmael, Abraham was first horrified, but was later told by G-d that it was OK. In the desert, Hagar and Ishmael almost died of thirst, but G-d provided them with a well that saved their lives.

Some Jewish religious scholars believe that after Sarah's death Abraham sought out Hagar and married her (though this view is far from unanimous).
4. Patriarch Jacob famously tricked his brother. What exactly did he do?


Answer: Bought his birthright for a bowl of lentil stew.

While Esau and Jacob were twins, Esau came out first and therefore had the birthright. Coming in from working the fields one day, Esau begged Jacob for a bowl of stew he was cooking. The latter agreed - on the condition he get the birthright. With Rebecca's help, Jacob further tricked his father Isaac into blessing him as the firstborn. No wonder Esau then got so angry Jacob had to flee!
5. Jacob's father-in-law Laban was a famous trickster, sending in Leah instead of Rachel into Jacobs bedchamber on the wedding night. But how did Rachel, one of the matriarchs, trick him?


Answer: She stole family idols, hid them under her skirt, and refused to get up because she was menstruating.

As Jacob fled Laban's household with his family (and his sheep), Rachel, unbeknownst to him, stole the family idols. When Laban barged in looking for them, Jacob swore that whoever has stolen them would be put to death. However, when Laban came to search his daughter's tent, she refused to get up on the grounds she was menstruating. Laban fled as fast as he could - good riddance!
6. Prince Shechem fell in love with Jacob's daughter Dinah. He raped her, but later asked to marry her. Jacob agreed on the condition that all men in the city get circumcised. What happened then?


Answer: Men were circumcised; Dinah's brothers then slaughtered them.

Shechem so loved Dinah that he convinced his father Hamor to agree to have all men circumcised. As the men lay recuperating from the painful procedure, Dinah's brothers Simeon and Levi came in and slaughtered them. Jacob was none too pleased about it!
7. Reuben was Jacob's oldest son. What did he do to lose his birthright?

On his deathbed, Jacob mentioned that the reason he wasn't giving a larger share of land to Reuben despite him being the oldest was that he had a relationship with Bilhah. Bilhah was Rachel's handmaid who was became Jacob's concubine to produce sons that would be considered Rachel's. Both she and Zilpah are alternatively referred to as Jacob's wives or household servants in Genesis.
8. Tamar was Judah's daughter-in-law. How did she trick him into impregnating her?


Answer: She pretended to be a prostitute.

Tamar was first married to Judah's eldest son Er. After he died, Er's youngest brother Onan was supposed to impregnate her; children of that union would be considered to be Er's and be the main inheritor. Onan, however "spilled his seed on the ground" and was subsequently killed by G-d as punishment. Judah was supposed to then have his youngest son impregnate Tamar, but he failed to do so. Tamar then dressed up as harlot and had Judah lay with her. Upon hearing of Tamar's pregnancy, Judah was furious until he recognized that he was indeed the father. Tamar gave birth to twin boys Perez and Zerah. Christians believe that Perez was the direct ancestor of Jesus.
9. Jacob's son Joseph really got on his brothers' nerves. What did they do to him?


Answer: Sold him into slavery.

Joseph's brothers were so angry with him they wanted to kill him. However, Judah convinced them to sell Joseph to a passing Egyptian merchant instead. They then ripped his multicolored coat and dipped it in blood to make Jacob believe Joseph was killed by beasts.
10. When Joseph's brothers came to the palace to ask for food, Joseph recognized them but did not reveal himself. After he told them to come back with their youngest brother Benjamin, he played a trick on them. What exactly did Joseph do?


Answer: Placed a goblet in Benjamin's bag and accused him of theft.

When Joseph's brothers came back to Egypt with Benjamin, Joseph placed a silver goblet in his brother's bag and accused him of theft. Only after Benjamin was arrested and brought back to the palace did Joseph finally reveal himself to his astonished brothers.
Source: Author Ptichka 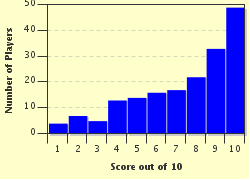 
Other Destinations
Explore Other Quizzes by Ptichka