This quiz is about the book of Genesis, New King James Version. It is the first in a series of quizzes on Bible books, submitted by the members of the Bible Believers Brigade.

Quiz Answer Key and Fun Facts
1. According to Genesis, how long did it take for God to finish all His work of Creation?

Many doubt we can take the Genesis account of creation literally. The writer of the New Testament book of Hebrews, however, says, "By faith we understand that the worlds were framed by the word of God, so that the things which are seen were not made of things which are visible." (Hebrews 11:3)
2. How did God create man?


Answer: From the dust of the earth

"And the LORD God formed man of the dust of the ground, and breathed into his nostrils the breath of life; and man became a living being." (Genesis 2:7)

In most of the Genesis account of creation God simply spoke into existence what he wanted to create, but when he created man he personally formed him from the dust of the earth and breathed life into him.
3. God had forbidden Adam and Eve to eat from the tree of the knowledge of good and evil. Why did Eve disobey this command?


Answer: The serpent deceived her into eating from it

Jesus, in teaching about Satan and his deceptive tactics, said, "You belong to your father, the devil, and you want to carry out your father's desire. He was a murderer from the beginning, not holding to the truth, for there is no truth in him. When he lies, he speaks his native language, for he is a liar and the father of lies." (John 8:44)
4. "And I will put enmity between you and the woman, and between your seed and her seed; he will bruise your head, and you will bruise his heel." - Genesis 3:15 God spoke these words when he discovered Adam and Eve had broken his command not to eat from the tree of the knowledge of good and evil. To whom was God speaking?

Many believe this particular passage of scripture contains a promise that, from the seed of the woman, there would come a Messiah who would redeem mankind from the consequences of Adam's and Eve's disobedience. He would bruise the head (power) of the serpent, a.k.a. Satan. Christians believe this promise was fulfilled by the life, death and resurrection of Jesus Christ.
5. "And Adam called his wife's name Eve; because she was the mother of all living." (Genesis) 3:20 How many children did Adam have in total with his wife Eve?

"After he begot Seth, the days of Adam were eight hundred years; and he had sons and daughters." - Genesis 5:4

Adam and Eve had three sons who are named in the Bible. Cain was the first. Abel, the second, was murdered by his brother Cain. Seth was born after his brother Abel was murdered. According to the above scripture Adam also had more sons and daughters as well.
6. The first city mentioned in the book of Genesis was named "Enoch". Who built this city?

"Then Cain went out from the presence of the LORD and dwelt in the land of Nod on the east of Eden. And Cain knew his wife, and she conceived and bore Enoch. And he built a city, and called the name of the city after the name of his son-Enoch." - Genesis 4:16,17

As a punishment for murdering his brother Abel, God had sent Cain out of his presence, away from his family and home to be a wanderer and vagabond. Building a city and naming the city after his son may have indicated that Cain had come to recognize the importance of community and the value of family relationships.
7. In obedience to God's command Noah built an ark and he, his family and pairs of all living creatures were spared from the great flood God sent to destroy every living thing on earth. After the waters receded, the ark came to rest on the mountains of Ararat. In what modern day country are these mountains believed to be located?

"The water receded steadily from the earth. At the end of the hundred and fifty days the water had gone down, and on the seventeenth day of the seventh month the ark came to rest on the mountains of Ararat." - Genesis 8:3-4

Mount Ararat is the tallest of several mountains located in eastern Turkey near the borders of Iran and Armenia. Many expeditions have been launched to locate the ark and some have claimed to have found remnants of the ark but there has been no conclusive evidence to verify these claims.
8. Eber was descended from Noah through his son Shem. What group of people derive their name from Eber?

"Then one who had escaped came and told Abram the Hebrew, for he dwelt by the terebinth trees of Mamre..." - Genesis 14:13

This is the first passage in the Bible that uses the word "Hebrew". Abraham was considered the father of the Hebrew people but he was himself descended from Eber. Eber is similar to a Hebrew word that means to cross over or pass through.
9. One of the descendants of Noah's son Shem was called Abram, which means "Exalted Father". After making a special promise to Abram, God changed his name to Abraham. What reason did God give for the name change?


Answer: Abraham would be the father of many

God also changed the name of Abraham's wife, who was barren, from Sarai to Sarah, and promised she would be a mother of nations. This was a remarkable promise since at the time Abraham was almost 100 years old and Sarah was 90. Yet, a year later Sarah gave birth to their son Isaac.
10. God made a covenant with Abraham that included many special promises for his descendants. What did God say would happen to all nations because of his covenant with Abraham?


Answer: They would be blessed

"I will bless those who bless you, And I will curse him who curses you; And in you all the families of the earth shall be blessed." - Genesis 12;3

The nations listed in Genesis originated from families. According to the Bible, it would be through the Abrahamic Covenant that the families of all nations would be blessed.
Source: Author wordwalker 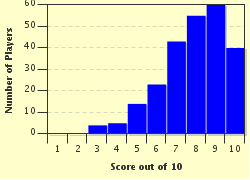 
Other Destinations
Explore Other Quizzes by wordwalker