This quiz will cover the first book of the Bible. The questions are all pretty easy, so you should ace this quiz!

Quiz Answer Key and Fun Facts
1. Which one was NOT a child of Adam and Eve named in Genesis?

Cain killed Abel, as we all know.
2. From which of Adam's body parts was Eve said to have been formed?

3. Who was Abraham's FIRST son?

Yes, Ishmael, not Isaac, was Abraham's first son. He was not born of Sarah, but of her handmaiden, Hagar. He is said to be the ancestor of Islam, as Isaac is the ancestor of Christianity and Judaism.
4. How did Rachel, Jacob's wife, die?

She died during the birth of her second son, Benjamin.
5. Who was Esau?

He was first, but Jacob tricked Isaac to get his birthright.
6. Who was Esau's mother?

Isaac found Rebekah in Haran, a town to the northwest of Babylon.
7. Who did Abram leave Harran with, to go into Canaan?

Genesis 12: 5. Eventually Lot went off toward the cities of the plain, Sodom and Gomorrah.
8. What was a symbol of God's promise that he would never again flood the Earth?

Yes, it was after the great flood. Y'know... with Noah and all.
9. Who was kept behind to ensure that Joseph's brothers would return with Benjamin?

Yes, and the brothers did return with Benjamin.
10. Who were Joseph's sons with the Egyptian woman Asenath?

Gad and Asher were his brothers, as was Naphtali. Sodom and Gomorrah were the two cities that God destroyed. Nebuchadnezzar was much later in the Bible.

Manasseh and Ephraim were Joseph's sons, as named in Genesis 46:20. Jacob adopted them as far as inheritance went, in honour of Joseph's mother, Rachel (Genesis 48:5-7 and rest of chapter).
Source: Author lukeskywalker 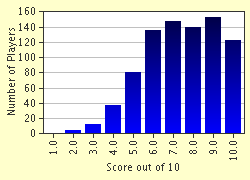 
Other Destinations
Explore Other Quizzes by lukeskywalker