Genesis of the Bible Trivia Quiz

This quiz is focused on the book of Genesis in the Bible. I have used the NAS for the information in this quiz. The questions are all multiple choice. Have fun! :)

Quiz Answer Key and Fun Facts
1. What did God guard (block) the Garden of Eden with?

This was in Genesis 3:24. He placed this on the east side of the garden. He did this after he banished Adam and Eve from the Garden of Eden for disobeying him.
2. What was the name of Adam and Eve's third son?

Cain was born first and Abel second. Seth was third. Enoch was a grandchild of Adam and Eve. Cain kills Abel in the book of Genesis and Adam and Eve believe that God gave them Seth to replace Abel. Genesis 4:25
3. What were the names of Jacob's wives?

Jacob worked for his uncle Laban for seven years in order to marry Rachel. Laban tricked him and, on the wedding day, put a veil on Leah acting like she was Rachel. He did this to marry off his first-born first. Jacob worked seven more years in order to marry Rachel. With Rachel, Leah, and their two servants, Jacob had twelve sons.
Genesis 29:15-30
4. What got Joseph out of jail?


Answer: A ladder with angels ascending and descending

Jacob had a dream about a ladder with angels ascending and descending in Genesis 28. He slept on a rock and dreamed this dream. He was coming from Beersheba and this happened at Bethel.
6. Why did Abraham leave his hometown of Ur?


Answer: God told him to

God told Abraham to leave his hometown of Ur in Genesis 12.
7. Where did God tell Abraham to take Isaac to sacrifice him?

God told Abraham to sacrifice Isaac as a test of faithfulness to Him. Abraham even gets to the point of tying Isaac up when an angel of the Lord stopped him. God then provided a ram caught in the bushes to use for the sacrifice instead. Genesis 22:1-19
8. What were the names of Isaac's sons?

Esau was the first-born son and Jacob was the second. Genesis tells us that Esau sold Jacob his birthright (his right of being first-born) for some lentil stew. Genesis 25:26
9. How did Isaac choose who to marry?


Answer: God chooses for him through a servant

Here's the story of how Isaac married Rebekah. Abraham wanted Isaac to marry someone from their own people, so they sent a servant to find a wife from Abraham's family. The servant went and came to a well, where women would come for water. He asked God to have the correct woman not only give him water, but also insist they water the camels also. Rebekah did this, and the servant brought her home to Isaac. Genesis 24
10. According to the Bible, what kind of animal did Noah not take on the ark with him?


Answer: He took all types of animals 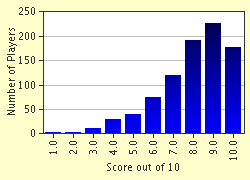 
Other Destinations
Explore Other Quizzes by happychristian