The Book of Genesis Trivia Quiz

This quiz is about the first book in the Bible: Genesis. All Bible verses are in the New American Standard Version.

Quiz Answer Key and Fun Facts
1. How many times did God see that what He had created was good in the first chapter of Genesis?

After they had eaten the fruit, both Adam and Eve hid in the garden from God. When God questioned them, Adam blamed Eve and Eve blamed the serpent. Because of their sin, God cursed all three of them and sent Adam and Eve out of the Garden of Eden. You can find the story of the Fall of Man in Genesis 3.
3. What was the name of Cain's son?

Cain's son Enoch was born after he had murdered Abel. Cain built a city and named it Enoch after his son. You can find this information in Genesis 4:17.
4. How old was Noah when the Flood happened?

Noah did not die until he was 950 years old, 350 years after the flood. You can find this information in Genesis 7:11 and Genesis 9:29.
5. Lot was rescued by Abram after being captured by enemy kings.

After a great battle, the people who survived were fleeing into a hill country. While the refugees were fleeing, the enemy kings plundered their cities of Sodom and Gomorrah. Lot and all of his possessions were taken during this plundering. In Genesis 14, you can find the story of the capture of Lot.
6. How many children did Leah have?

Leah bore Jacob six sons and one daughter. Her sons were Reuben, Simeon, Levi, Judah, Issachar, and Zebulun. Her daughter was Dinah. You can find this information in Genesis 29:31-35, Genesis 30, and Genesis 34:1.
7. How old was Joseph when his brothers sold him into slavery?

You can find this fact in Genesis 37:2.
8. Joseph was 50 when he interpreted Pharaoh's dream.

Joseph was actually only 30 years old. You can find this in Genesis 41:46.
9. Which brother did Joseph hold hostage in Egypt?

During the famine, Joseph's brothers went to Egypt to buy food. Joseph knew his brothers but he did not reveal himself. He told them that he thought they were spies, and that to prove that they were not spies, they needed to bring their youngest brother, Benjamin, with them next time they came. He also took Simeon hostage until they returned. You will find this story in Genesis 42:1-38.
10. Where did Joseph's family settle in Egypt?

Joseph gave them that land for grazing their sheep. They lived there, for shepherds were loathsome to the Egyptians. You can find this information in Genesis 46:34-47:6.
Source: Author TheBatterie 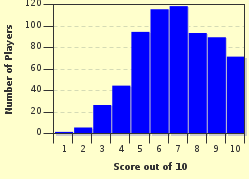 
Other Destinations
Explore Other Quizzes by TheBatterie