A quiz on meteorologcal phenomena

Quiz Answer Key and Fun Facts
1. From which generic type of cloud do thunderstorms/tornados come from?

Cumulus (Cu) clouds have mainly flat bottoms and distinct fluffy, 'cauliflower-like' tops. Cumulonimbus (Cb) clouds can have ragged bottoms (due to downdrafts) but their tops reach the top of the troposphere (some times the updrafts are so strong they tops punch through) and become glaciated and less distinct.

A mature Cb cloud will then spread out along the tropopause giving a shape like an anvil. Cumulonimbus clouds are the only source on thunderstorms and if the wind shear is great enough can cause tornadoes. Towering Cu are similar to Cbs but are not glaciated and can cause heavy showers. Nimbostratus (Ns) clouds are rare and are associated with heavy rainfall. Stratocumulus (Sc) clouds are quite common and are a major source of drizzle precipitation.
2. What does an isohyet represent?


Answer: A line of equal rainfall

You see isohyets on a rainfall map/chart.
3. According to the Beaufort scale, what wind speed (in knots) is deemed to be a fresh breeze?

The Beaufort scale is a scale to give a numerical representation of wind speed to observed effect of the wind. Initially Rear Admiral Beaufort of the Royal Navy around 1805 devised a scheme which related wind force to its effect on a 'well conditioned man-o-war' (a ship). The Beaufort scale as it in use today was accepted in 1926 and revised slightly in 1946.
4. Can steam fog form when warm air moves over cold water?

The DALR is a measure of how a dry air parcel, which does not mix with the surrounding atmosphere would cool as it rises. The parcel expands as it rises due to decreasing pressure and thereby cools.
7. What is CAPE?

CAPE is one measure of the instability of the atmosphere. It gives an indication of the avaiable energey a parcel would have if it was buoyant in comparison to the environmental conditions. On a Skew T/Log P diagram (or F160 as it is known in Australia) it is the area where the parcel trace is greater than the environmental trace.
8. What type of cloud would be more to likely give showers of precipitation reaching the ground?

Cumulus (Cu) clouds are generally formed by convective processes (giving their distinctive flat bases and cauliflower-like tops). Stratocumulus (Sc) clouds are not in distinct cells like cumulus clouds, and can be formed by mixing or also by moisture trapped under an inversion layer. Any precipitation from Sc is most likely to be drizzle. Cirrocumulus (Cc) clouds are rare, above 20,000ft and are not associated with any precipitation. Altocumulus (Ac) clouds are above 8,500ft and are either formed in very hot, dry climates where convective processes reach the middle of the troposphere or by some mid level processes and can indicate mid level instability (especially altocumulus castellanus). Altocumulus clouds can give showers but it is less likely to reach the ground as either the atmosphere is very dry below the cloud thereby the precipitation would evaporate or the atmosphere is too cool to promote coalescence as is required of droplet formation.
9. The lowest 100km of the atmosphere is divided into four parts. What is the correct order from the ground up?

The troposphere extends to about 15km above the earth's surface(dependent on laltitude), the stratosphere to about 50km, the mesosphere to about 80km and the thermosphere above that.
10. Which of these is a formation requirement of a tropical cyclone (hurricane)?

All of these things are required as well as a pre-existing low pressure area and upper level divergence.
Source: Author wallos 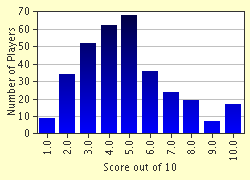 
Other Destinations
Explore Other Quizzes by wallos