Riders on the Storm Trivia Quiz

Our world is full of many amazing weather related phenomena. This quiz displays both the wrath of Mother Nature, and also the beautiful apparitions she rewards us with.

Quiz Answer Key and Fun Facts
1. Which of the following options is a real example of a poorly understood weather phenomena?

This photo depicts the rarely seen phenomenon known as volcanic lightning. It is thought that erupting volcanoes can produce lightning. The highly energized hot air and gases being expelled clash with the cool atmosphere. This produces the regular branched lightning often found in thunderstorms as well as something similar to ball lightning.

The exact mechanisms involved are still a topic of debate. But there is no doubt that when you mix a volcanic eruption with a lightning storm the result will be an amazing display of nature's power.
2. What is indicated by the size of a hailstone?


Answer: How severe the thunderstorm is.

Hail is basically balls of ice falling from the sky. The stronger the thunderstorm the larger the hailstone. Hail is more common during the summer months and the stones fall so fast that they do not have time to melt. Hailstones typically measure between one to eight inches(25mm and 200mm)in diameter.

Their sizes are usually compared to common objects such as peas or golf balls. If hailstones collide in midair they can stick together and be as heavy as nine lbs.(4kg). Hailstones are just one of the things that can injure you if you are outside in a thunderstorm.
3. Sometimes called "flying saucer clouds" what is the proper name for the unusually shaped clouds in this photo?

Lenticular clouds are often mistaken for UFO's due to their smooth, round shapes. The often appear to be stacked like pancakes. They form when air moves over mountains, cooling the air sufficiently for the act of condensation to start. Lenticular clouds are different from other clouds because they are stationary and do not move with the wind.
4. Where would it be most common to see a fire whirl?

Fire whirls, also known as fire tornadoes, firenadoes and fire devils are whirlwinds of flame. They are most commonly seen in areas experiencing large forest fires, intense heat, and turbulent winds. This weather phenomena is basically a tornado-like vortex of flames that occurs over large fires and spins like a fire tornado.

They usually last less than a minute, but are a bizarre sight to see.
5. What is the primary difference between a hurricane, a cyclone, and a typhoon?

These are tropical storms that have heavy winds and intense rainfall that is capable of killing many thousands of people when they hit land.
6. Which of these statements about rainbows is false?


Answer: You cannot have a rainbow at night.

Sir Isaac Newton was the first to provide a valid scientific explanation as to what a rainbow was and how it formed. This arc of spectral colors is caused by refractive dispersion of sunlight in drops of rain. While it is not likely that you will see a "moonbow", because the moon does not usually reflect enough light, it does occur. If you look closely at this image of a double rainbow you will see that the colors are inverted in the second rainbow. Upside down rainbows are known as cirumzenithal arcs and are sometimes called sun smiles.
7. What is the term for these ice crystal prisms that appear on either side of the sun, sometimes giving the illusion of three suns?

During very cold weather, ice crystals in the air act as prisms causing sundogs to appear as colored spots of light to the left and right of the sun. There are usually one on each side, rarely just one. They are also always 22 degrees distant and remain at the same distance above the horizon as the sun does.

They sometimes appear to be attached to a ring or halo around the sun. The same phenomena can be seen alongside the moon on very cold nights. The appearance of sundogs has often been thought of being a fairly accurate predictor of rain.
8. Waterspouts are basically tornadoes over water and are usually much weaker than their terrestrial counterparts.

Waterspouts usually move slower than land tornadoes and are sometimes stationary. Their winds are much slower and because of where they are located they are usually less dangerous to the general population. They can be found in the ocean, seas, and large lakes. They normally form in tropical areas but can also occur during snow storms at which time they are call snowspouts.
9. Which of the following is the best description of the weather phenomena known as a simoom?

A simoom is just one of the many types of dust storms that plague certain areas of the planet. A simoom is a very strong, dust laden wind found in areas often near the Sahara Desert. There are different names in different locations for this type of weather.

The temperature of these wind storms can be as high as 130°F and be deadly to any type of life, both flora and fauna that gets caught in its path. While they are more common in desert areas, they can occur almost anywhere.
10. What scale is used to measure the strength of a tornado?

Tornadoes can be one of the most destructive types of weather phenomena. These spinning tubes of air can reach speeds as high as 483 kilometers per hour (300mph) and remain on the ground for over 100 miles. The countries of India and the U.S. have the most tornadoes in general.

The Fujita Scale is the common way to measure the strength of a tornado. It ranges from F0 which is a small tornado which causes minimal damage to F5 tornadoes which are the largest and cause the most devastation.
Source: Author dcpddc478 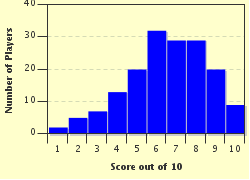