Dust In the Wind Trivia Quiz

What do you know about some of the more unusual weather phenomena? Here are ten rather unusual events that happen from time to time across the planet. Is some of it caused by dust in the wind? You bet!

Quiz Answer Key and Fun Facts
1. Technically known as a parhelion, what is the more common name for this type of atmospheric phenomenon?

Sundogs are formed when sunlight is bent or refracted by ice crystals suspended in the atmosphere. The result is a bright patch of light that occurs on eith side of the sun once it is low in the horizon. Sometimes a sundog will appear on both sides of the sun.

At night the same phenomenon can happen and moondogs are produced. These typically only occur when the bright light of a full moon is available.
2. In which of these locations are you most likely to experience an aurora?

The gorgeous colored lights that can be seen in the night sky are are usually the result of a phenomena known as an aurora. They are usually seen near the Earth's magnetic poles. The country of Canada is known for its beautiful auroras. Fluctuations in the solar wind occasionally cause auroras to be visible at lower latitudes, but this is not common. Auroras are usually green but can be seen in almost any color.

The Earth's magnetic field captures the solar wind and its particles pulling them towards the magnetic poles.

Here they are bombarded by atmospheric gasses causing them to emit light. Different gasses equals different color auroras.
3. Which of the following is the name of the clear or white rainbow-like effect often seen on misty days?

Fogbows are made the same way that rainbows are, using the same configuration and moisture. When the air is full of small raindrops, fogbows will sometimes form inside a fog or a cloud. They will always be in the opposite direction from the sun. Other names for this phenomenon are ghost rainbows, cloudbows, or white rainbows. The best place to look for a fogbow is in thin fog when the sun is bright. They are often seen over the ocean, also.
4. Which of the following locations, on average, has the most lightning strikes per year?

In many areas of Africa, summer is year around and lightning is a normal part of life. The small village of Kifuka in the Democratic Republic of the Congo is often listed as having the most lightning on the planet. This small town is located at 3,200 ft. (970m) and is pelted year around with lightning.

This small town averages approximately 158 bolts of lightning over every square kilometer each year.
5. What is the name for the lighting phenomenon that is seen as a bright red light over the top a thunderstorm?

One of the more unusual weather related phenomena is red sprites. They tend to form almost instantaneously at altitudes of 25-55 miles (40-90 km)in the air. This is a bright flash of light that occurs over a thunderstorm microseconds before a bolt of thunder is emitted.

The exact cause of this phenomenon was not known at the turn of the 21st century and it was not until 1989 that the first actual photograph of a red sprite was taken.
6. Volcanic eruptions are often seen with bolts of lightning.

Through the years, thousands of lightning flashes have been seen over large volcanic eruptions. The exact cause is a matter of scholarly debate. Some scientists think that the charged particles responsible for volcanic lightning may originate from the material ejected from the volcano.

Others think it is caused within the ash clouds. The exact cause may be hard to figure out due to the inhospitable locations where most of this occurs.
7. Sunbeams like those in the photo are properly known as crepuscular rays.

Crepuscular rays are beams of light that originate from the sun. They appear to radiate out from the center and are usually seen with a cloudy background. These beams are usually parallel and of approximately the same length.
8. What does a yellow sky generally mean?

While it has been known that yellow or, sometimes, green skies mean a bad storm is incoming, scientists still are not sure of the reason why this happens. One hypothesis is that storm clouds of a certain thickness and water concentration act as a filter for the sunlight that is coming through. Common sense advises people to seek shelter if the clouds above them turn a strange shade of yellow or green.
9. Which of the following options is an illusion, without substance or reality?

Mirages occur when the ground is very hot and the air is cool. When light moves through the cold air and into the layer of hot air it is refracted or bent. The u-shaped bend in the light causes our brain to see something that is not there. Our brain thinks the light travels in a straight line and the vision appears to be real.
10. What is the common term for this whirlwind of dust in the wind?

A dustdevil is simply a whirlwind of air into which dust and debris have been caught up. While similar to tornados, dustdevils are usually much smaller, extending less than 100 ft. in the air. They are usually seen during dry conditions when sunlight is providing strong heating of the surface and while winds are relatively light.
Source: Author dcpddc478 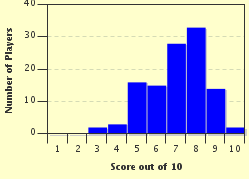