The world's oceans experience some unique and interesting weather. This quiz covers phenomena observed and procedures followed by ships and coastal communities.

Quiz Answer Key and Fun Facts
1. Which wind scale, developed in the early 1800s, originally categorized wind by the effect it would have on the sails of a frigate?

The Beaufort Scale originally had 13 categories ranging from "sufficient to give bare steerage" to "that which no sail can withstand". As sail gave way to steam, the scale categories changed to describe how the sea behaves - from "calm" to "huge waves".
2. Which alliterative phrase describes fog formed when cold wind blows over warm water?

Sea smoke is also known as steam fog. If the air is cold enough, sea smoke can cause hoarfrost on ships' structures.
3. Which place, where the Labrador Current meets the Gulf Stream, is the foggiest place on Earth?

Ships in the navigable semicircle generally try to make best speed and keep the wind on their starboard quarter, which should get them out of the path of the storm as quickly as possible. Those caught in the dangerous semicircle generally put the wind on their starboard bow, a much rougher and slower ride.
5. What is a tornado that forms over water called?

A waterspout is a strong columnar vortex of wind and water droplets. Tornadic water spouts are associated with thunderstorms at sea and are relatively rare. The most common form is non-tornadic, spawned from dark, flat-bottomed cumulus clouds.
6. Bands of high pressure and calm winds occur at approximately 30 degrees North and South latitude. What is the popular name for these zones?

The etymology of "horse latitudes" to describe these warm and calm zones is uncertain. A popular but unproven explanation is that ships became becalmed here and had to jettison their cargoes of horses when water and food ran low.
7. Sailors rely on one particular weather instrument at sea which has a scale in either inches, millimeters of mercury or millibars. What is this instrument, also known as "the Glass"?

The barometer measures atmospheric pressure and gives the best indication of changing weather. Savvy sailors will keep an eye on "the Glass" to detect approaching low-pressure storms and high-pressure calmer areas.
8. Often seen on TV as coastal storms approach, storm warning flags indicate the strength of winds forecast for the area. Which flag(s) indicate the approach of a hurricane?

The more flags, the stronger the wind: a hurricane (winds of 64 knots or over) is indicated by two red square flags. A single red pennant indicates a small craft advisory (wind 22-33 knots), two pennants a gale warning (34-47 knots) and one red square flag is a storm (48-63 knots).
9. Storms at sea outside the tropics that show rapidly falling barometric pressure, of 1 mB per hour or more, are sometimes referred to as what explosive term?

"Bombs" are extra-tropical cyclones that rapidly strengthen, as shown by rapidly falling barometric pressure. In December 1986, a "bomb" formed off Iceland that was equivalent to a Category 5 tropical hurricane.
10. "SST" is an important weather forecasting observation made by ships at sea. What is "SST"?

Since oceans cover most of the Earth, the sea surface temperature is an important factor in determining local and global weather. "Surface" usually means the top 20 meters of the ocean, where ships can measure temperature directly.
Source: Author wjames 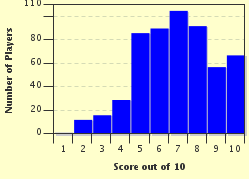 
Other Destinations
Explore Other Quizzes by wjames