Quite a Cloudy Day Trivia Quiz

Clouds are some of the most interesting meteorological phenomena. Besides looking good, or ominous, some can predict the weather days in advance. See how you score on this quiz that will go right over your head!

Quiz Answer Key and Fun Facts
1. Glider pilots think this type of cloud is great but pilots of powered aircraft stay away from them. What are they called?

Lenticular (lens shaped) clouds are a type of cumulus cloud that will form where there is an obstruction to airflow; it can be mountains or man-made objects. There is considerable turbulence surrounding these clouds, dangerous for powered aircraft but glider pilots seek out the strong updrafts generated around the clouds to gain altitude and fly for long distances. Lenticular clouds have been mistaken for flying saucers on more than one occasion.
2. Technically, this is a cirrocumulus or altocumulus cloud, but what is the folkname given to this type of cloud?

These cloud formations got their name from English sailors who thought they looked like the scales of Atlantic mackerel fish. They are usually found at altitudes above 18,000 ft/5,486 m, and are often the result of a weather system breaking up. The sailor's rhyme is "Mackerel in the sky, three days dry".
3. Here's one that made our ancestors quail. It may be called a halo or sunbow. What is the name of the cloud that causes it?

"Everybody's dancin' in a ring around the sun" went some of the lyrics to "The Golden Road to Unlimited Devotion" by the Grateful Dead but many early cultures thought the haloes portended times of danger or change. They are actually caused by high, thin clouds composed of ice crystals. If the sun is at just the right angle to the viewer (often 22 degrees) a ring is seen around it.
4. What is this particular type of cumulonimbus cloud called?

Cumulonimbus clouds are storm clouds that can reach as much as 60,000 ft/18,300 m in height. Anvil top clouds form when the ice crystals at the top of the cumulonimbus cloud reach the bottom of the stratosphere and flatten out because the stratosphere is warmer than the air in the cloud. The anvil can spread for long distances, even hundreds of miles if conditions are right.
5. It may look like benign weather in this picture but it won't be for long. What is the colloquial name for this type of cirrus cloud?

Cirrus clouds can be high-altitude, long, wispy streams such as the ones seen in this photo. Technically, cirrus uncinus (with turned-up ends) are properly called mares tails; the long, straight subform is likely to be cirrus fibratus. If you see either, expect a weather change in 12 to 24 hours.
6. This type of cloud can cover large distances and sometimes the whole sky. It's name is taken from Latin. Do you know what it is?

Most cloud names are taken from Latin; stratus means layer. They may produce a light drizzle but no significant rain. They are found below 6,000 ft/2,000 m, forming when a layer of warm, moist air rises from the earth and its relative humidity increases.
7. You can tell it will be a nice day here because of the fair-weather clouds in the sky. What is their name?

Cumulus clouds are low-level fluffy clouds appearing by themselves or in groups. They contain little moisture but if the atmosphere becomes unstable or they pick up much water vapor they can change into tall cumulonimbus clouds known as thunderheads.
8. Yes, that really is a cloud formation. Can you guess what its name is?

Mammatus (from the Latin 'mamma' meaning breast or udder) clouds usually form on the bottom of cumulonimbus storm clouds but might be seen on other types. They are the only cloud that forms from sinking, rather than rising, air. While their looks might make you apprehensive, they form after the worst part of a storm system has passed and do not mean that a tornado is imminent.
9. You're right, this is fog. Okay, smarty, fog forms when there is very little difference between air temperature and what?

Fog may - or may not - form when the relative humidity is at, or close to, 100%. The more reliable indicator for fog to form is when the difference between air temperature and the dew point (the temperature at which water vapor condenses) is less than 4°F/ 2.5°C. Precipitation from fog occurs when the water droplets join and become too heavy to remain in the fog.
10. What time is it if you see a cloud like this? It's time to take cover! What is this cloud type known as?

This is called a funnel cloud; it forms at the base of cumulonimbus clouds, usually supercell thunderstorms. If a funnel cloud reaches the ground it is called a tornado. They have the potential for immense destruction and while occurring mostly in "Tornado Alley" in central North America, they can appear most anywhere if weather conditions are right.
Source: Author CmdrK 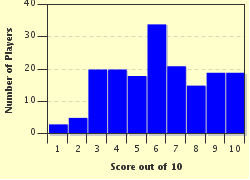