It Wasn't a Dark and Stormy Night Quiz

Quiz Answer Key and Fun Facts
1. Wind has a lot to do with a coming storm. On a sunny day, which winds would be most likely to indicate a coming storm front (in the Northern Hemisphere)?

Winds from the east have long been associated with coming storms. This is because of the rotation of low pressure systems in the Northern Hemisphere. In the Bible, Moses calls on the East Wind to bring a plague to Egypt, demonstrating that people had the ability to read weather from the environment long before modern instruments.
2. There are two contrasting types of pressure systems: low and high. Rainy weather is usually caused by which type of pressure system?

Low pressure causes the air to move inwards, and then rise. Rising air causes moisture to condense, which eventually forms rain. This is why you will often see the weatherman talk about an incoming low pressure system bringing rain.
3. You are out camping and want to know what the weather may be like the next day. Luckily you have made a campfire to cook for the night. What should you look at in the fire to determine what tomorrow's weather may hold?


Answer: The way the smoke rises

If the smoke does not rise in a steady manner, and instead rises a little, swirls around, and also falls towards the ground, it indicates low pressure in the air, and can signal coming rain. The dampness of the logs can only indicate if it rained recently, not if it will rain again!
4. Dew on the ground in the morning seems like it would be a good indicator of coming rain or not. Which of these statements about dew has an element of truth?

Although it seems counter-intuitive, if there is dew covered grass in the morning the weather is more likely to be clear as it indicates clear skies overnight have allowed the temperature to drop and caused dew to form. If the grass is dry it is probably because there are a lot of clouds or a strong breeze in the area, signalling stormy weather.
5. You may have heard the phrase "flowers smell best just before the rain," but why is this phrase true?

Scents are stronger in moist, humid air, like the air that occurs before a rain. This is because water molecules absorb organic compounds that humans and animals smell, and bring them closer to our noses. If you have ever farted while in the shower, you will know stuff smells stronger in a wet environment!
6. Clouds are an easy thing to look at to predict the weather. One thing to look at is how high or low a cloud is in the sky. Do high or low clouds signify rainy and stormy weather?

Low clouds, like the cumulonimbus clouds that are so familiar to everyone as thunderclouds, indicate impending bad weather. High clouds mean that rain will not come that day, although certain types may be forecasting rain within two or three days.
7. We have all heard the rhyme "Red sky at night sailors delight, red sky at morning sailors take warning." Do you know what in the air causes the red sky that makes this rhyme an accurate indication of coming weather?

The red sky is caused by light refracting in the sky in areas of high humidity, similar to what happens in a rainbow. Red skies tend to indicate coming rain. Seeing a red sky at night though, while looking to the west at the setting sun means the weather bringing the humidity has already passed your location, and is moving away. Looking to the east at a red sky when the sun rises, indicates the easterly winds will bring that wet weather to your location.
8. Swells in the water, contrasted with the local waves can give an indication of weather patterns hundreds of miles from your location. Swells are notoriously hard to read because of their interference with local sea patterns and the knowledge of direction you need to accurately predict the weather from them. Which of these factors does not affect the swell of the water?


Answer: Number of fish swimming in the area

The swell of the ocean is the big waves that proceed over a long distance and period of time. These can be different or completely opposite from the local ripples and current. The swell of the ocean is formed by winds persisting over a longer period of time and blowing over a long distance, sometimes hundreds of miles away from you.
9. The color of the shadow the clouds throw on the ocean surface can tell you about the weather those clouds will hold. Which of these is a true statement?


Answer: If the ocean surface under the cloud is black it is a strong wind

A dark shadow under a cloud indicates a strong wind, while the distant shadow having the same color as the ocean near you indicates a lighter wind and clearer weather. If there are no clouds to cast a shadow, there will be no rain!
10. During a clear night, you notice that there is a ring around the moon and it looks as if it is wearing a halo. The size of the diameter of the ring indicates when rain will arrive, with a large ring showing that the rain will come sooner or later?


Answer: Light refracted by ice crystals in the sky

Moisture laden clouds that may or not be visible in the sky contain ice crystals from condensed water. These crystals refract light that shines through and creates the halo-like effect.
12. Summer night fog is ironically indicative of coming good weather the next day. This is because fog is formed when the air is cool enough to condense instead of evaporating. For a summer night to be cool enough for fog to form, which of these must be true, indicating good coming weather?

Cloudy skies do not allow heat to escape into space, as heat is absorbed and re-radiated by the cloud. Fog can only form on these summer days when the sky is sufficiently clear to allow heat to escape into space. Fog in the winter, however, gives a much different weather reading!
13. Humans have lost much of the finer power of the senses throughout history, but many animals still retain these. Many animals can help us predict weather patterns. Birds are one species to look at closely to determine what the weather may bring. Which of these statements is true of bird behavior?


Answer: Lots of birds sitting on power lines can indicate an approaching low pressure system and a storm

In contrast to other animals who may make a sound to warn of incoming weather like a tornado, birds tend to be quiet during the lead-up to a storm. When birds fly high, it indicates clear weather. Low flying or landed birds indicate a system of low pressure in the area, which affects birds in flight. Lots of birds on the ground, on wires, and in trees usually indicates a coming storm.
14. The proverb that says "Porpoises in a harbor, expect a storm," is actually incorrect, and porpoise behavior indicates the opposite.

Porpoises and dolphins and other animals that lack gills will often seek calmer water like the water in a harbor during a storm. The choppy seas during a storm may make it hard for the animal to come up and breathe, so they seek shelter in a natural harbor.
15. Modern weather technology has proven helpful in understanding weather patterns and predicting the weather. Which of these statements about the use of modern weather-predicting technology is NOT true?

As anyone who has watched the weather on the news should know, even with the vast improvement in weather technology, the weather people are never 100% accurate. In some cases non-instrument weather prediction can be more accurate than instrument based prediction.

In a short time frame, like predicting the weather for tomorrow, someone skilled in using traditional folk methods may be just as accurate as the weatherman!
Source: Author geowhiz 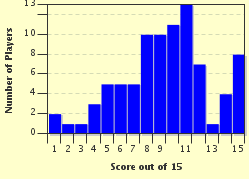 
Other Destinations
Explore Other Quizzes by geowhiz