Ever wonder what causes the strangest weather you've seen? Play this quiz to find out!

St. Elmo's fire is ionized air that gives the impression of lightning (or fire), but is really just a discharge of electricity. It looks like something you'd see in a plasma lamp. Often occurring during thunderstorms, it is most prominently seen on ships out over open water. Early sailors like Magellan and Columbus seemed to know that it wasn't really lightning, because they never abandoned ship when they saw it.

It was named after St. Elmo, the patron saint of Mediterranean sailors.
2. Woof! Sometimes when it's cold outside I can be seen on both sides of the sun. What am I?

Also known as parhelion, sun dogs can occur when the sun shines through cirrus clouds composed of ice crystals. The crystals refract sunlight, causing either a pair of bright lights on the sides of the sun or a whole halo around it. Sometimes you can see sun dogs and a halo at the same time.

They most often occur in middle latitudes during winter time when the sun is low on the horizon.
3. What type of strange looking cloud is named after a female gland?

Mammatus clouds are lumpy and occur in the anvils of some cumulonimbus (thunderstorm) clouds. Sometimes ice crystals get wrapped up in the updrafts of a tall cumulonimbus cloud, causing the air to become cooler than its surroundings and sink downwards. Mammatus clouds form when many of these air pockets sink together.

They can be a sign of severe thunder approaching, so anyone watching them is not advised to approach them.
4. Having a funnel cloud and a spinning vortex, what oddity that forms over water closely resembles a tornado?

Waterspouts most frequently occur during the summer in the tropics and in the Great Lakes region of the United States. Because they are very similar to tornados, a tornado warning is usually given to the surrounding area when one moves ashore. There's a theory that waterspouts are the cause of non-aqueous rain, but it has not been proven yet. Non-aqueous rain is when frogs or other light animals are reported to have fallen from the sky.
5. Sounding like a sign of the Zodiac, what happens when falling ice crystals evaporate before they hit the ground?

Virga are clouds with ice crystals in them. They have wispy tails that extend from their bases and reach for the ground. As the ice in a Virga cloud starts to fall, the air pressure surrounding it increases. This causes it to get more and more compressed, and eventually it evaporates in mid-air before reaching the ground. Commonly seen in desert and temperate climates like Australia, they can make gorgeous spectacles during red sunsets.
6. Nicknamed the "Maracaibo lighthouse", Catatumbo lightning happens so regularly that mariners use it as a navigational aid. In which country can it be found?

One of the stormiest places on Earth is where the Catatumbo River empties into Lake Maracaibo. Here lightning flashes over 20,000 times a night for 10 hours straight during about 160 days out of the year. The lightning is caused by closed wind circulation. Lake Maracaibo is surrounded by mountains on three sides, which traps warm and moist air flowing in from the equator and condenses it into clouds with enormous electrical energy. Scientists also claim that Catatumbo lightning is the single greatest generator of tropospheric ozone (not to be confused with the protective ozone layer).
7. A "haboob" in the Middle East is more commonly known as what in the west?

Haboobs can form by a number of processes. The most common is when microbursts from thunderstorms push dust and debris outwards from their centers. They are most typically seen in the Sahara Desert and the Middle East. Australia and the American southwest can also experience them on rare occasions. (I actually got stuck in one when driving in Utah ~ scary!)
8. Sometimes making a snowman is easier than making a snowball. What is it called when a snowball forms naturally?

Snow rollers most often take cylindrical log shapes. They only form under specific conditions- about an inch of light wet snow and enough wind to get them rolling. They can also form on hills or underneath trees, where the snow that drops from branches provides enough force to get them moving.
9. Sprites, jets, and ELVES are associated with which form of lightning?

Sprites, jets, and ELVES typically occur above thunderstorms and last for only a few seconds. They are electrical discharges that take on a wide range of shapes.

Sprites were named after Puck from "A Midsummer Night's Dream". They are usually red and and look like jellyfish in the sky. Jets are blue, brighter than sprites, and somewhat needle-shaped. ELVES (Emissions of Light and Very Low Frequency Perturbations due to Electromagnetic Pulse Sources) is a wordy acronym for a dim glow that lasts for only a millisecond.
10. Frequently appearing around dawn or dusk, what name is given to visible rays of sunlight that appear to have seeped through the clouds?

Crepuscular rays are known for their beautiful "showers of light". You can sometimes see them when the sun is setting behind a dark, isolated cloud. The rays appear because of scattered dust and water droplets in the atmosphere.
Source: Author skydude13579 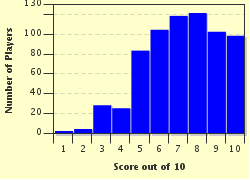 
Other Destinations
Explore Other Quizzes by skydude13579