A quiz about the fascinating world of meteorology. Good luck!

Quiz Answer Key and Fun Facts
1. What type of precipitation is associated with a temperature inversion?

Freezing rain starts out as snow at higher altitudes and melts completely on its way down by passing through a layer of warm air. As it nears the ground, it enters a layer of air below freezing causing it to become supercooled. It immediately freezes when in contact with anything. It is a very dangerous form of precipitation.
2. What is graupel?

They are like hail but are made up of ice crystals formed around snow and generally break apart when squeezed together. It is often called soft hail.
3. Where would "ground clutter" most likely be observed?

Ground clutter refers to the echoes off of objects such as buildings and hills during a radar image. They often appear as areas of precipitation when it is actually just the result of an echo off of an object on the ground. Weather Underground uses a mathematical algorithm so the user can choose to remove the clutter; however, this does not always work as it may remove real echoes too!
4. A foehn is which type of weather phenomenon?

Foehns are winds associated with mountain ranges. They form on the lee, or sheltered, side of the mountains. The Chinook winds of North America are an example.
5. What volcano was the source of the "Year Without a Summer" in 1816?

The "Year Without a Summer" brought worldwide starvation during the year of 1816 due to a lack of sunlight blocked by the volcano's ashes. There was no crop season and an estimated 92,000 people died as a result of this Indonesian volcano. It is regarded as the deadliest volcanic eruption ever recorded in history.
6. Which state is not part of Tornado Alley?

I have seen various maps indicating where Tornado Alley is. I used the one that showed the largest area. It included: North Dakota, South Dakota, Wyoming, Colorado, Nebraska, Kansas, Oklahoma, Texas, Minnesota, Iowa, Missouri, Arkansas, Louisiana, Illinois, Indiana, Ohio, Kentucky and Tennessee.
7. A line of intense, widespread, and fast-moving thunderstorms is known as a what?

Haboob: Another name for a sandstorm or duststorm.
Squall Line: A smaller line of thunderstorms.
Surge: An increase in sea water height due to storms.
8. What natural disaster occurred on September 8, 1900 in Texas?

The hurricane struck Galveston, TX and left over 6,000 of the 37,000 residents dead. Winds were estimated at 140 mph and is considered the deadliest natural disaster in U.S. history.
9. Where are doldrums located?


Answer: At the equator

Doldrums are the result of hot air at the equator rising upwards, then moving north and south due to cooling. The cooled air then falls back down at the horse latitudes (30 degrees) where it returns back to the equator. This causes the area near the equator to have very calm winds that can even disappear altogether.

It is a notorious region for sailors who can be trapped there for weeks. It is also a region that is very unpredictable; ferocious storms can be generated there. It is also the location where hurricanes originate.
10. If I was interested in observing a moonbow where would be a good place to go?

Moonbows are much fainter and often appear white (if they even appear at all). Long exposure photographs can generate the spectrum of colours the human eye cannot detect. For a moonbow to form, the moon should be full or very near full, low in the sky (except when produced by waterfalls), and the sky must be dark. Rain must also be falling opposite the moon (if not produced by a waterfall).

This combination makes moonbows much rarer than rainbows. Cumberland Falls, near Williamsburg, KY is one of the most famous places to observe this phenomenon. Waimea, HI and Victoria Falls on the border between Zambia and Zimbabwe are widely known for their moonbow occurrences as well.
Source: Author Beuferd 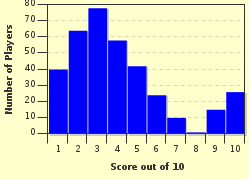 Related Quizzes
1. Red Sky at Night Average
2. It Wasn't a Dark and Stormy Night Average
3. Sometimes It Snows In April Average
4. Average Meteorology Tough
5. Seasonal Weather in Wichita, Kansas Average
6. My Mind Melted! Average
7. My Weather is Worse Than Yours Average
8. Hazard a Guess? Average
9. Advanced Meteorology Concepts Tough
10. Dust In the Wind Average
11. Quite a Cloudy Day Average
12. There's Something In the Air... Tough


Other Destinations
Explore Other Quizzes by Beuferd