There's Something In the Air... Quiz

Everyone talks about the weather but how much do you really know about it?

Quiz Answer Key and Fun Facts
1. Ancient civilizations didn't have nightly news to inform them of the daily forecasts. What did they use instead?

Ancient people used their powers of observation to make weather predictions. Cloud formations, optical phenomena, and meteorological events were used by the Babylonians to help forecast short-term weather patterns and changes. Weather-measuring instruments such as hygrometers and barometers came later, in the 15th and 17th centuries respectively.
2. On February 2 of every year, the citizens of Punxsutawney, Pennsylvania hold a festival in honor of their most famous resident, a groundhog. Legend has it that this groundhog can predict whether or not spring will come early. This groundhog has a name. What is it?

Troposphere comes from the Greek word "tropos" meaning turn or change. This is the layer where most atmospheric changes take place. It is also the layer in which we live. It extends from the earth's surface up to 12 miles (19 km) high.
4. The scale used to measure the strength of hurricanes is known as what?

In 1971 Herbert Saffir and Robert Simpson created the scale that bears their names. The scale measures the strength of hurricanes that form in the Atlantic Ocean and Northern Pacific Ocean, specifically east of the International Date Line. The scale is divided into five categories, with level 1 representing little or no damage to structures and level 5 representing irreparable damage or complete destruction.
5. The Federal Emergency Management Agency (FEMA) was formed in 1978 to respond to large-scale disasters in the U.S. Which government agency is the parent agency of FEMA?

For over 200 years the U.S. has had teams in place to respond to disasters. It wasn't until FEMA was established under President Jimmy Carter that large response teams were trained, organized, and ready to deal with disasters of a great magnitude. FEMA also helps to set up funding to replace structures that have been badly damaged or destroyed.
6. What instrument is used to measure the water-vapor content of air?

There are different types of hygrometers. For example, the metal coil type uses a coil and paper strips. The coil changes shape according to the amount of humidity absorbed by the paper. The hair tension hygrometer uses human or animal hair, with the hair placed under tension so that the length of hair changes as the humidity changes.
7. Huge sand storms occur in desert regions of the world. What are these storms called?

The word "haboob" is Arabic and it means "blowing violently." These huge dust clouds are formed when a blast of cold air shoots out from underneath a thunderstorm cloud. The air hits the ground hard and picks up large clouds of dust and dirt. The dust cloud then moves along the ground at a rapid speed, up to 50 miles an hour (80kph). These storms are not dangerous, just messy.
8. Which of the following is NOT a type of tornado?

Tornadoes are usually spawned from thunderstorms. A change in wind condition, increased wind speed, and a low, rotating cloud mass all contribute to bringing a tornado to life. Once the funnel is formed this force of nature takes on a life of its own. The Midwest region of the U.S. has been dubbed "Tornado Alley" due to an abundance of tornadoes that form there.
9. Two of the world's largest moveable flood barriers are located in Europe. The largest is in the Netherlands. Where is the second largest located?

The Thames Barrier was constructed in 1982 and is located downstream of central London. Since London is prone to flooding, the barrier was built to protect the city from high tides and storm surges.
10. Underwater landslides that generate tsunamis are called what?

The word "tsunami" means "harbor wave" in Japanese. Tsunamis are caused by landslides, volcanic eruptions, or underwater earthquakes. Tidal waves differ from tsunamis in that they are much smaller and are formed from the gravitational pull of the sun or moon.
Source: Author nmerr 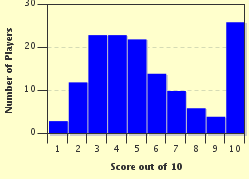