This quiz tests your knowledge on advanced meteorology concepts.

Quiz Answer Key and Fun Facts
1. The charge distribution of a mature thunderstorm is negative at the top and positive at the base of the cloud.

The charge distribution is responsible for creating the lightning associated with the thunderstorm. The negative charge at the base of the cloud induces a positive charge at the surface. This makes it possible for a conductive channel to develop through which the lightning stroke travels.
2. Which of the following is not favorable for hurricane formation?

Strong vertical wind shear disrupts the hurricane's organization. Unlike midlatitude cyclones which are dynamically driven by the jet stream, hurricanes are driven by thermodynamic processes.
3. Which of the following is not favorable for the development of severe thunderstorms?

Veering winds are favorable for the development of severe thunderstorms. Backing winds indicate north winds with westerly flow aloft, which would cause cold air advection into the area.
4. The National Weather Service is in which department of the Executive Branch?

The National Weather Service is a part of the Department of Commerce. Its goals are to protect life and property through the prediction and research of weather.
5. Which of the following is not a jet stream that affects the United States?


Answer: All of theses are jet streams that affect the US

The polar front jet is most influential on the weather in the United States. It drives mid-latitude cyclones which produce most of the nation's precipitation.
6. Hygroscopic nuclei have an affinity for water vapor

Cloud condensation nuclei are vital to precipitation processes. Without these nuclei, precipitation could not occur.
7. Hurricanes and tropical systems near the equator often achieve a balance between pressure gradient forces and centripetal forces. This balance is called

Cyclostrophic balance in hurricanes occurs near the equator because the Coriolis Force is near zero, so the pressure gradient force balances the centripetal force of the hurricane.
8. Which of the following is not frequently associated with radar echoes of a supercell thunderstorm?

Bow echoes are associated with squall lines and produce heavy wind damage.
9. Which type of thunderstorm is considered to be most dangerous?

The Saffir-Simpson scale uses actual conditions that occurred during the storm to determine its rating. It uses central pressure, wind speed, and storm surge to give the hurricane a rating.
11. Cold fronts occur in a pressure ridge

Cold fronts occur in a pressure trough. This is the reason for kinking the isobars on a cold front. Pressure falls as the cold front approaches and rises as it moves away.
12. The low-level jet:

The low-level jet is very important to Great Plains weather. It provides warm, moist air which provides precipitation for the Great Plains region. It is strongest during the night because the boundary layer is stable and friction caused by the surface is minimized, allowing for faster winds aloft.
13. Which of the following processes is responsible for the formation of frost?

Deposition is the process of water vapor going from its vapor state to its frozen state. Frost is not frozen dew.
14. Starting at the surface and moving up, which of the following is the correct order of the first four layers of the atmosphere?

The troposphere is the atmospheric layer in which most of the earth's weather occurs. The stratosphere contains the ozone layer and has a temperature inversion throughout. The mesosphere and thermosphere have no significant influence on the weather. The outermost layer is the exosphere.
15. Where are the sun's rays directly hitting the earth's surface on March 21st?

The sun's rays directly strike the earth's surface twice each year. Once on March 21st and again on September 21st.
Source: Author ksuweatherman 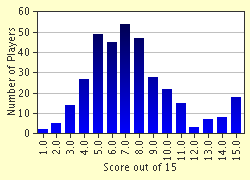 Related Quizzes
1. Red Sky at Night Average
2. It Wasn't a Dark and Stormy Night Average
3. Sometimes It Snows In April Average
4. Average Meteorology Tough
5. Seasonal Weather in Wichita, Kansas Average
6. My Mind Melted! Average
7. My Weather is Worse Than Yours Average
8. Hazard a Guess? Average
9. Fun Meteorology Facts Very Difficult
10. Dust In the Wind Average
11. Quite a Cloudy Day Average
12. There's Something In the Air... Tough


Other Destinations
Explore Other Quizzes by ksuweatherman