I used to be in the Weather Bureau and retain my interest in clouds (they match my thinking!).

Quiz Answer Key and Fun Facts
1. Clouds come in assorted types. One classification is cloud base height: low, middle-level, high. Which of these is a middle-level cloud?

Altostratus height varies from 12,000 feet to 18,000 feet. It's difficult to estimate the height without aircraft reports or balloon humidity traces, but we used to "have a go". Cirrostratus is high level, usually well over 25,000 feet. Nimbostratus is very thick altostratus, with lots of rain, and cloud base often below 5,000 feet.
2. Another classification is stratification - whether a cloud is flat, or convective uplift makes it "bumpy". Which of these is cumuliform?

Cumulonimbus is, without doubt, the most spectacular cloud formation, with associated lightning and thunder, and a huge anvil-like top into the stratosphere at 60,000 feet or higher. It may contain a million tons of water. Obviously also the most dangerous, with lightning killing thousands across the world yearly.
3. Many clouds are difficult to categorise. A common cloud formation has equal characteristics of cumuliform and stratiform. Which is it?

I always thought stratocumulus was the most boring cloud. Very common especially in the morning, dissipating during the day as heating increases convection.
4. Clouds can also be classified by the causation of their formation. This can be by orographic uplift, by frontal uplift, or by convection, and of course by a combination of causes. Which cloud is formed solely by orography (terrain)?

I have to admit my favourite cloud is fair-weather cumulus. What's the use of a warm summer afternoon without cauliflower puffs of cloud to make the sky interesting? Hill fog is simply stratus cloud "on the deck" because of lifting and cooling of wind blowing up a hill-slope.
5. Why do most low-level clouds have flat bases?

Let's get this straight - you can't see water vapour. As air cools uniformly with increasing height (the adiabatic lapse rate, for the cognoscenti), it can contain less water vapour. When it can't hold any more, water condenses in tiny droplets, and lo and behold, we have a cloud!
6. In a stable airmass (little convection) with strong winds, it is possible to see which interesting cloud?

Lenticular clouds are important to aviators, as they reveal the existence of "mountain waves" downwind of hills, good for gliders but often associated with severe turbulence and dangerous downdrafts. Scarf and cap clouds are associated with convective towering cumulus and cumulonimbus. Noctilucent clouds are weird, extremely high clouds, seen in the late evening, and may be comet dust.
7. Dark clouds are caused by the evaporation of dirty water.

Evaporation is the transfer to the gaseous state of water. Any particles of dirt and dust are left behind. True, cloud droplets develop around microscopic "condensation nuclei", but cloud colors are related to sunlight, shadowing, cloud thickness, droplet size etc.
8. You can get very wet when the main cloud is nimbostratus.

Stratus is usually very shallow, a few hundred feet, and can produce slight drizzle, but is about as dampening as fog. Nimbostratus, on the other hand, is very thick and produces continuous rain. And, there is a cloud with the unwieldy name of "fractostratus of bad weather", ragged stratus within rain from higher clouds.
9. High atmospheric pressure is usually associated with dry weather.

Unfortunately, as with most generalisations, there are qualifications (otherwise meteorologists would be out of a job!). High pressure is associated with descending, warming air. I've already mentioned our old friend adiabatic lapse rate. It works in reverse, too, which forms inversion layers of increasing temperature with height. These are very stable and stop clouds growing.
10. The World Meteorological Organization defines standard code listings for all clouds. For example, cumulus is Cu and altocumulus is Ac. What is the code for cumulonimbus?

Go figure!
11. To generalise, the wettest regions of the world are the tropics, the driest, the poles. What is NOT a reason for this?

Self-evident, really. Even though the great deserts of the world are at relatively low latitude, they never straddle the Equator. There exists an inter-tropical convergence zone between the northeast and southeast Trade winds where convergence of moist, warm air masses causes enormously high cumulonimbus clouds due to the tropopause (the level at which the lapse rate becomes zero) being highest over the equator.
12. The driest regions always have little cloudiness.

As with most generalisations, there are exceptions. High and middle level cloud can overshadow the driest regions. Due to orographic peculiarities (the proximity of the Andes and the cold Humboldt current) Lima in Peru is usually cloudy but dry.
13. The largest cloud masses are those associated with low-pressure regions. Why is this?

Low surface pressure causes low-level winds to blow in from higher pressure regions, the trajectory being altered by the Earth's rotation (Coriolis force). The inward-blowing winds converge, are forced upwards, cool, and cloud droplets condense out. At the highest levels of the troposphere, there is a divergence of air.
14. What is a cold front?

Under the influence of a low pressure region, cold air is advected from higher latitudes. Cold air is dense and slides under warm, moist air, thereby lifting and cooling it, forming a line of cloud and rain called a "front". A number of meteorological terms originated during the First World War, so share some terminology.A warm front refers to warm air sliding over dense, cold air, producing the same effect of adiabatic cooling - cloud and rain. An occluded front occurs when a cold front overtakes a warm front.
15. What cloud is associated with tornado formation?

This is also associated with other nasties like hail, squall lines, rotor clouds with extreme turbulence, and "microbursts" of descending air to knock planes down. The theory is that tornadoes originate with the coalescence of several cumulonimbus clouds, given a "twist" by upper-level jet streams, the resulting extreme updraughts and low pressure causing the rotating funnel cloud with winds up to 300 miles per hour!
Source: Author brian59 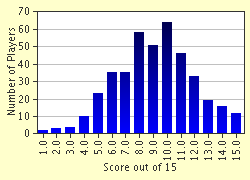 
Other Destinations
Explore Other Quizzes by brian59