Thanks to your help in 'Doublemm's Disastrous Interview', Doublemm was able to secure a place at the University of Manchester, and has somehow managed to make it through two years of exams! Now, can you help Doublemm with his latest challenge?

Quiz Answer Key and Fun Facts
1. As Doublemm enters the lab for his second year assessment, the examiner asks him to first fetch a pipette. Doublemm knows he has heard this word before, but can't get the image of a pipistrelle out of his head. Help Doublemm out by choosing the most appropriate descriptive definition of a pipette.


Answer: An instrument for transferring small volumes of liquid

The most common pipettes found in biological labs are formed like pens or screwdrivers and are used to transfer small volumes of liquid, as small as a few microlitres.
2. Next, the examiner asks Doublemm to measure out 250 microlitres of distilled water. "Uh, oh", thinks Doublemm - he's more used to dealing in pints. What volume is Doublemm being asked to measure out?


Answer: A quarter of a millilitre

This small volume of water is most easily acquired using the instrument mentioned in question one - the pipette. Volumes such as these are often transferred into small vessels such as cuvettes (used in sample analysis) or Eppendorfs (used to hold samples during centrifugation).
3. Doublemm realises that he will be working with cell cultures as he is shown a small dish with a lawn of yeast cells growing on top of a gel-like substance. What is this gel-like substance most likely to be?

Agar is obtained from seaweed and is first mixed with water before being microwaved into a molten sludge. Glucose (or another food source) is then added and the liquid jelly is poured into Petri dishes and allowed to set. This is done in sterile conditions to prevent contamination.
4. Before the yeast cells can be transferred into a vessel in order to be grown on a large scale, the vessel, the examiner tells Doublemm, must be autoclaved. Noticing the vacant expression on Doublemm's face, the examiner puts the budding scientist under pressure by asking him to explain this term. Help Doublemm with this quandary - what is autoclaving?


Answer: The heating of equipment under high pressure

The purpose of autoclaving is to sterilize the equipment. In Doublemm's case, the number of micro-organisms which may exist in the vessel into which the yeast will be placed must be reduced as much as possible to prevent contamination of the sample. Yeast cells are often grown in a liquid media within these vessels and the media are placed inside the vessel prior to autoclaving. Adding media also has the benefit of providing steam during the autoclave, as well as killing any micro-organisms in the media.
5. Pipetting and autoclaving done, Doublemm is asked by the examiner to inoculate the vessel. You stop Doublemm as he approaches the 20 litre container with a syringe containing a vaccine. What is Doublemm actually being asked to do?


Answer: Add the yeast cells to the vessel

The definitions of inoculation here and in the popular, medical sense are the same - "the placement of something which will grow or reproduce" (http://en.wikipedia.org/wiki/Inoculate). The vessel will contain media (nutrients needed for yeast growth) and glucose is often added also.
6. The examiner tells Doublemm that to monitor the cell growth of the yeast, a sample must be collected and he must measure the OD. "Channel 4 OD?", Doublemm thinks. However, the examiner is not referring to the popular video sharing site. What, in this instance, does OD stand for?

Measuring the optical density involves using a spectrophotometer - an instrument which detects the amount of light which is absorbed/transmitted through a sample. Samples to be analysed are placed into cuvettes.

The OD600 is often measured when growing yeast. This means measuring the optical density by passing light of wavelength 600 nm through the sample. A cuvette filled with media only is often used as a reference when measuring the OD of samples of yeast.
7. Rather surprised that Doublemm has made it this far, the examiner asks him to induce the media by adding the appropriate solution to induce the expression of the yeast's genes which are under the control of the Gal4p promoter. Understandably thrown by the technological language, Doublemm searches his brain for which of the solutions in front of him should be added to the yeast culture. What would be the best choice?

The odd looking code in the question - Gal4p - refers to a region in the yeast genome where the appropriate proteins assemble in order to then go onto express the gene which is found downstream of this so called "promoter". The name - Gal4p - alludes to the fact that galactose is used to activate this process.

It is important that the galatose is added when the glucose is beginning to be used up, as plentiful glucose will inhibit the inductive effect of galactose.
8. Doublemm gets the evening off while his yeast culture grows overnight, and decides to cram all the information he can about the humble S. cerevisiae. Bright and early the next morning, the examiner announces that the cells will be harvested by spinning the samples down using a high speed rotor which generates forces several thousand times the force of gravity. Which piece of lab equipment is Doublemm most likely to use to do this?

Centrifuges can be pretty intimidating machines to work with. The centrifugal forces generated by the rotors are enough to buckle the tubes if they are not sufficiently filled with sample and the noises they make can certainly make you jump! Centrifuging yeast samples with the aim of isolating whole cells requires a rather modest spin at 5000 rpm for around five minutes.

The liquid fraction in the tubes (known as the supernatant) can then be poured off, leaving a pellet containing whole yeast cells.
9. Now that the cells have been isolated, they can be broken open and the desired protein can be purified. The examiner tells Doublemm that the protein has a built-in histidine tail at its ends which allows it to be purified using a certain technique. Doublemm twitches as he sees this next question coming. Can you help him out? Which of the following pieces of equipment will be most helpful to Doublemm in purifying a protein with a poly-histidine tail?


Answer: A column with nickel ions bound to it

Gel columns may be constructed with nickel ions bound (or chelated) to the gel. This is useful since nickel ions have a high affinity for histidine and so will bind any proteins which contain a poly-histidine tail (like our desired protein), meanwhile, other proteins will simply wash through and can be discarded.

The bound protein can then be eluted (washed out) using imidazole - a molecule similar in structure to histidine and so one which will compete with histidine to bind the nickel ions.
10. As it nears the end of the lab examination, the smell from the fermenter, likened to freshly baked bread and a pub at last orders, fills the air. The examiner points to a tub of pink powder and instructs Doublemm to clean up after himself. This pink powder, known as Virkon, is an important part of any experiment which deals with live cells. What role does Virkon play?


Answer: It is a disinfectant

Only a small amount of powder will be needed to disinfect the fermenter Doublemm ran during his exam. Water is added to the powder, forming a bright pink solution. Do make sure that the fermenter is rinsed thoroughly after this to prevent cells in the next run being killed by residual Virkon, though!
Source: Author doublemm 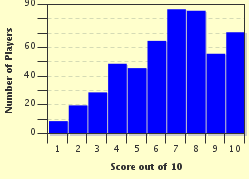