Hello! This quiz comprises of nutrition and the way living organisms get nutrition. Have fun and enjoy! Don't forget to rate it!

Quiz Answer Key and Fun Facts
1. What is the tubelike elongated mouthpart of a butterfly called?

The single-celled amoeba has no particular shape. Pseudopodia also help it move. The word comes from the roots 'pseudo' meaning 'false' and 'podium' meaning 'foot'. After engulfing, the food vacuole goes to the nucleus, where it is digested with the help of enzymes.
3. Name the five processes involved in holozoic nutrition in the correct order of execution.

Cows have a four-chambered stomach to digest cellulose - the substance the cell walls of plant cells are made of. In the first chamber (the rumen), bacteria and other microorganisms break down the food. Then the food is sent to a second chamber called the reticulum after which the half-digested food is sent back to the mouth.

Then the ruminants chew the cud. Then the food bypasses the first two chambers and enters a third chamber called the omassum where it is broken down into smaller pieces. Then, in the fourth chamber called the abomassum, enzymes act upon the food and digestion is completed.
5. What is the phycobiont organism in lichens?

A lichen is an example of symbiotic nutrition. It consists of a fungus and an alga who cooperate and live with each other, both of them getting mutual benefit. The fungus, which is the mycobiont organism, supplies the alga with water and minerals that it draws from the soil.

The alga can photosynthesize. The alga, the phycobiont organism, prepares food out of the materials and supplies the fungus with food too.
6. Sir Frederick Gowland Hopkins proved that animals can die without ____________ what?

Vitamins are an integral part of the human diet as well. Vitamins A, D, E and K are soluble in fat. Vitamins B (and its sub vitamins) and C are soluble in water. They perform vital functions in our bodies.
7. Since herbivores only eat vegetable matter, the canines are either absent or not well-developed. So there is a big gap between the incisors and the premolars. What is this gap called?

Moreover, most of the teeth of herbivores are in the sides of the cheeks. Only the incisors, used for cutting food, are at the front. However, carnivores have very well-developed canines for tearing flesh.
8. What does a hydra use for ingestion?

A hydra uses its tentacles around its mouth to engulf small aquatic organisms around it. Then it kills those organisms with its stinging cells. After this, it draws nutrition from them. This is an example of predatory nutrition.
9. Insectivorous plants ingest insects with the help of their modified _______ what?

Those plants ingest insects to obtain nitrogen for making proteins. Though the air is 78% nitrogen, plants do not have the required enzymes to take it in. Insectivorous plants take in nitrogen in the form of nitrates, nitrites, etc. from insects. Some examples are pitcher plant, sundew and Venus flytrap.
10. Which of the following organisms has the highest metabolic rate? 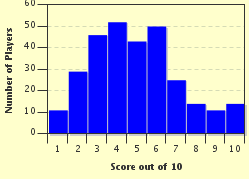 
Other Destinations
Explore Other Quizzes by angikar