This quiz will focus on the psychological themes and theories associated with child development. Enjoy!

Quiz Answer Key and Fun Facts
1. There are many branches of psychology. Which branch is the branch of psychology devoted to the study of changes in behavior and abilities over the course of development?

Although this is true, the domains are not distinct; they form an integrated whole. One domain can influence another. For instance cognitive can influence emotional.
3. Which period best describes "the prenatal period"?

Discontinuous development involves a rapid change at each new stage in development and then they change only slightly for a short while. New methods of understanding and responding are shown at specific periods during the child's development.
5. What does John Locke's view of "tabula rasa" refer to?


Answer: a blank state when children are born

John Locke believed that children were born "blank". This is his vision of a passive child (Berk, 2009). Jean-Jacques Rousseau had an opposing view (Larsen, 2008). Other philosophers such as Charles Darwin believed in natural selection, a concept of survival of the fittest.
6. Which approach is Hall and Gesell associated with?

The normative approach is defined as an approach in which "measures of behavior are taken on large numbers of individuals and age related averages are computed to represent typical development (Berk, 2009)." Hall used questionnaires for children to tell him about themselves. Gesell observed the children and conducted parental interviews.

Mental testing was done by Alfred Binet who was able to construct the first successful intelligence test with his colleague Theodore Simon.
7. According to Berk (2009), children go through a series of stages where they confront conflicts between biological drives and social expectations. How the conflicts are resolved will determine the individual's ability to get along with others, learn, and to cope with anxiety. What perspective does this refer to?

This psychoanalytic perspective was once used to treat emotional and behavioral problems in children. This was chiefly in the 1930s and 1940s.
8. What is the outermost layer of Bronfenbrenner's model consisting of cultural values, laws, customs, and resources?

The model is based on Urie Bronfenbrenner's ecological systems theory. This views children as developing within a complex system of relationships affected by multiple levels of the surrounding environment.
9. In Erikson's psychosocial stages, the trust versus mistrust stage occurs at ages three to six years.

This stage, when the child is learning about the world, lasts from birth until around 18 months of age. The child needs consistency during this period.
10. What is known as the ability to adapt effectively in the face of threats to development?

A child's positive relationship with their family members promotes resilience. When they provide social support this helps a child to cope with stress and solve problems constructively.
Source: Author abbyolurin1

This quiz was reviewed by FunTrivia editor crisw before going online.
Any errors found in FunTrivia content are routinely corrected through our feedback system.
Most Recent Scores
Jan 24 2023 : RebeccaQ: 8/10
Dec 27 2022 : nmerr: 7/10 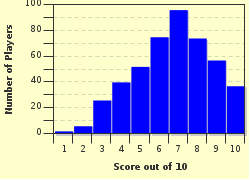 Related Quizzes
1. Will She or Won't She? Easier
2. A Short Pencil is Better Than a Long Memory Average
3. What Goes On In Your Mind? Average
4. 12 Angry Men: An Anger Review Average
5. Body Language With Fred Average
6. New to Me, New to You Average
7. Psychiatry 101 Average
8. People Love To Fall In Line - Conformity Studies Average
9. Psychology Trivia: Why We Do What We Do Average
10. Kill Your Television Average
11. Psychology 101 Average
12. The Freudian Mechanisms of Defence Average


Other Destinations
Explore Other Quizzes by abbyolurin1