You are currently in college and have just become an intern at a psychiatric office called the Psychiatric Cat. Are you ready for the job?

Quiz Answer Key and Fun Facts
1. You are asked to show a patient cards with inkblots on them. The patient will tell you what the inkblot looks like. What is this test called?

Based on the patterns in what the patient sees in the inkblots, a psychiatrist can get an idea of what is wrong with the patient. Also, it is important for the psychiatrist to stand behind the patient so that the latter does not see the former's reactions.

A Rorschach test can be a better way of approaching than asking questions because it is sometimes hard to get a patient to talk about their personal feelings to a psychiatrist they have never met before.
2. The head psychiatrist now asks you to test your patient's ability to handle interpersonal relationships. You are testing which of these?

Emotional intelligence accounts for the majority of your daily success. It lets you interact with and understand other humans properly. However, according to a study by Forbes, CEOs have the lowest emotional intelligence of any type of job.
3. Next, you are told to administer a Thematic Apperception Test (TAT). Which of these do you need?

During a TAT, the psychiatrist shows the patient a picture and asks three questions. These questions are: 1. What is happening? 2. How is the person in the picture feeling? 3. What is going to happen next? Just like the Rorschach test, the psychiatrist can then look for patterns in what the patient is saying, and it is usually easier to get a patient talking this way than if you start asking them about their personal lives right away.
4. Another patient comes in. You need to measure her IQ, which stands for which of these?

The average IQ is 100, and the normal range is approximately 90 - 110. With an IQ of 140 or above, you are considered a genius!
5. You have found out that your patient uses phonetic spelling. This means she is likely to spell the word "phone" which way?

Phonetic spelling is a sign that a patient may have a lower than average IQ. English has many strange spellings of different words, such as "enough" or "mnemonic," and it is one of the least phonetic languages. Two of the most phonetic are Spanish and Swahili.
6. You need to test a patient for Attention Deficit Hyperactivity Disorder (ADHD), so you first ask them for symptoms, then, to rule out any other cause for the symptoms, you do which of these?

ADHD and ADD (Attention Deficit Disorder) are different, although people often use them interchangeably. ADHD patients are characterized by hyperactive behaviors, while ADD patients find it difficult to focus on a task.
7. The head psychiatrist decides on exposure therapy for a patient. This patient may need to do which of these?


Answer: Face situations that made them uncomfortable before

This is one of the most common therapies. It is especially applied to patients after a traumatic event. It helps patients feel more comfortable with doing something that used to make them uncomfortable, through continuous exposure.
8. You are in college to become a psychiatrist while you are interning at the head psychiatrist's office. This means you are studying to become which of these?

DMD stands for Dental Medical Doctor. PMD is not a real type of doctor. PhD is a doctorate in any other type of job than medicine.
9. Which type of professional might you, as a psychiatrist, want to have as your partner?

Psychiatrists and psychologists often work together as their jobs are quite similar. However, a psychiatrist is an MD; a psychologist does not necessarily need to be a qualified doctor.
10. As a psychiatrist, which of these will you attempt to treat?

Psychiatrists treat any type of mental illness. The other options listed are genetic and will be treated by an appropriate specialist.
Source: Author mishutka 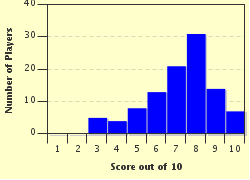 
Other Destinations
Explore Other Quizzes by mishutka