Here is a quiz for those of you (and there are many) who have taken at least an introductory psychology course. Good luck.

Quiz Answer Key and Fun Facts
1. What research team was influential in their study of human sexual behavior and response?

The St. Louis-based research pair studied a range of human sexual behavior like arousal, homosexuality, sexual physiology and sexual dysfunction in the 1960's and 1970's.
2. What phenomenon of developmental psychology occurs when a child (usually around 9 months) no longer ascribes to an "out of sight, out of mind" view of the world?

Object permanence simply means the child has the capacity to know an object still exists even though it is out of the child's view. Renowned developmental psychologist Jean Piaget conducted experiments placing the grasp of object permanence in the first (or sensorimotor) period of his developmental stages theory.
3. Which of the following is NOT considered one of the basic tastes - those given specific names?

The classic "patsy" experiment, Asch had a group of students view lines of different length and state which was the longest. Only one student was a real subject, while the rest were in on the experiment, and purposely chose the incorrect line as being longest.

While it was clear which line was longest, many of the real subjects acquiesced or "conformed" to the group and chose the incorrect line.
5. Which part of a neuron, whose name comes from the Greek for "tree," extends from the cell body like a tree branch and receives stimuli from other neurons in the brain?

Dendrites receive stimulation at the synapse from the release of neurotransmitters from a neighboring neuron's axon terminal, thus creating an electrical impulse in the postsynaptic neuron.
6. Which of the following is not considered an anxiety disorder?

Amnesia is typically a result of head trauma, although it can also be brought about by substance abuse or brain deterioration due to old age. Anxiety disorders involve abnormal, irrational fears, beliefs or states of arousal that impair social functioning.
7. What term could best be used to attribute horrific behavior such as that of the Nazi Party in WWII, the Red Scare in the United States and the ritual suicides of Jim Jones' Peoples Temple cult?

Groupthink is a phenomenon by which members of a group reach a consensus without critically evaluating the validity of the consensus. It is generally regarded as a negative term, used to describe the type of deindividualization associated with unspeakable acts.
8. Which neurotransmitter is also widely referred to as "adrenaline?"

Epinephrine also acts as a hormone in the body, secreted by the adrenal gland, hence, it's other name adrenaline.
9. Which of the following is NOT one of the four primary lobes of the human brain?

The fourth lobe is the occipital lobe. Dorsal typically means that which is situated towards the back of an animal or part of an animal. The term "dorsal" can refer to an area of the brain like the "dorsal occipital cortex", although it is not considered a lobe.
10. In a telephone survey of political views, significantly more respondents claimed they would consider voting for an ethnic minority candidate than actually feel that way. What error in polling is this most likely a result of?

Response bias is the tendency for respondents to answer in ways that are more socially desirable or that they feel will please the interviewer, i.e. the desire not to be viewed as racist. Although the other choices are common forms of error, they are not as common in a case like this. Most telephone surveys do not employ convenience sampling (grabbing people off the street).

A loaded question is one which the respondent may agree with some, part, all or none of the question because it contains too much information (ex. "Do you feel the government should lower taxes by cutting military spending?"). Due to statistical tests of significance, margin of error could not account for the "significant" difference seen in the data.
Source: Author Nick307 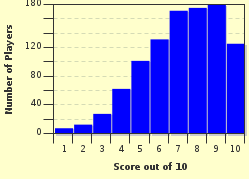 
Other Destinations
Explore Other Quizzes by Nick307