Psychology Trivia: Why We Do What We Do Quiz

Psychologists develop theories and explanations to explain why people do the things that they do. Can you choose the correct explanation? This quiz is based on information presented in the textbook "Psychology: Themes and Variations, 9th edition".

Quiz Answer Key and Fun Facts
1. John was excited when he won November's perfect attendance reward and attributed his success to how responsible he was. The next month Madison won the award, and John attributed her success to a rigged system. What psychological theory could explain John's behavior?

The self-serving bias could be used to explain John's behavior, because he attributed his own success to his strengths, and Madison's success to external factors, a rigged system. According to to the self-serving bias, John also would have most likely attributed his opponent's failure to win the award the month before to their own weaknesses.
2. A woman was robbed on a busy street while people stood around and did not offer their help. Which phenomenon occurs when people are less likely to offer help when they are in a large group?

The bystander effect is often the reason that bullying goes unpunished, because no one wants to take responsibility. People are less likely to provide help when they are in groups than when they are alone. Diffusion of responsibility occurs when a bystander does not help because they believe that someone else will.
3. The highly controversial Milgram experiment of 1963 tested which form of compliance?

Many participants obeyed completely and delivered the highest shock setting, which would have killed the person.
4. A baby cried when something was out of sight because he did not realize that it still existed somewhere else. What concept did this baby not understand?

Children develop many skills as they grow older, including the ability to understand object permanence. Many infants do not realize that an object they can not see still exists, so when you take an object away they may cry and not look for it. Older children will realize that the object is still there but hidden.
5. Which of these occurs when you like those who show that they like you?

Many people say that opposites attract, but in reality it is the opposite. Psychological studies have shown that we tend to want to be around those people that want to be around us.
6. Jim observed his older brother cleaning his room and modeled this behavior by cleaning his own room. What type of learning does Jim display?

Observational learning occurs when people's behaviors are influenced by the observation of others, who are called models. There are three stages to this type of learning. Firstly, someone must pay attention to the behavior. Next, they must retain the information on how to do the action. Finally, the action is reproduced by the observer. Observational learning occurs in both humans and animals of any age.
7. Molly was misbehaving in school. Her father chose not to punish her, and instead he tried to change Molly's behavior by rewarding her with ice cream when she was good. What type of learning is this?

There are many different types of learning. This is an example of operant conditioning because Molly was learning to behave in a certain way as a result of outside factors. Her father rewarded Molly when she was good at school, which would increase the chances that Molly behaved at school.
8. Randy knocked on your door and asked you if you could donate $1,000 to his charity. You could not afford this, but you agreed to pay Randy's second smaller request of $100. What marketing strategy did Randy use?

Salesmen and marketers use many techniques to get people to buy their item or donate. This is an example of the door-in-the-face technique because Randy asked for a larger donation that you turned down. You were then more likely to agree to Randy's smaller request of $100.
9. Jim went through a traumatic experience, and then he tried to bury memories of the event to try to forget them. Which defense mechanism was Jim using?

Many people develop defense mechanisms to deal with their feelings or a traumatic event. Repression occurs when distressing thoughts and feelings are buried in the subconscious. Repression is often seen in soldiers who have experienced post-traumatic stress disorder from dealing with war situations.
10. Someone had a car accident and lost memories from events that occurred before the accident. Which type of amnesia did this person experience? 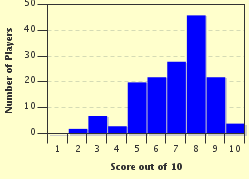 Related Quizzes
1. Will She or Won't She? Easier
2. A Short Pencil is Better Than a Long Memory Average
3. What Goes On In Your Mind? Average
4. 12 Angry Men: An Anger Review Average
5. Body Language With Fred Average
6. New to Me, New to You Average
7. Psychiatry 101 Average
8. People Love To Fall In Line - Conformity Studies Average
9. Kill Your Television Average
10. Psychology 101 Average
11. The Freudian Mechanisms of Defence Average
12. Cognitive Psychology Average


Other Destinations
Explore Other Quizzes by Computer100