Creams of the Crops Trivia Quiz

A sports mix of some of the most recognized names in sports. I hope that you have fun with this all multiple choice quiz. :-)

Quiz Answer Key and Fun Facts
1. One of hockey's greatests, Wayne Gretzky began his NHL career with which team?

Liston became a champion after being in and out of prison at a young age. He defeated boxing great Floyd Patterson in 1962 with a first-round knockout at the age of 30. Ironically, Liston and Patterson met the following year with the exact same results. Liston died in 1970 at the age of 38.
4. U.S. College Sports- The 2001-02 UConn Women's basketball team went 39-0 to an undefeated season. Who was their leading scorer?

Cash scored in double-figures in 37 of the 39 games to help the Huskies to a 39-0 season. She was also voted the NCAA Final Four Outstanding Player in 2002. Cash went on to be drafted by the WNBA Detroit Shock, and finished third in the Rookie of the Year voting. Then in 2004, she donned the uniform of the United States and headed for the Olympic Games.
5. In a PGA Tournament in 2001, a father and son by the name of Nicklaus played on the courses. What was Jack's son's name?

Gary began touring with the PGA in 2000. Unfortunately, Gary missed the cut more often than not. Although he did not compete for the rookie of the year in 2000, Gary's goal was just to retain his tour card, which he did.
6. Nascar's first Daytona 500 was held in 1959. Who won this inaugural race?

The race happened on February 22. Petty nosed out runner-up Johnny Beauchamp for the win, but the winner declaration took three days due to its close finish. The race had 42,000 fans in attendance, and has grown into an icon.
7. One of the greatest soccer players in history was David Beckham. What is his born name?

Beckham made his name playing for Manchester United. His first team debut was September 1992.
8. Which 1932 Olympic great won two gold medals, one silver, and later became a historic professional golfer?

Babe set two records in the Los Angeles Olympics of 1932, the 80-meter hurdles and the javelin throw. Her silver came in the high jump. Born Mildred Ella Didrikson, she earned the nickname 'Babe' when she hit five home runs in one game. Babe began to play golf after the Olympics in 1935, then later married professional wrestler, George Zaharias.

She was the winner of the U.S. Women's Open three times in her golfing career. Babe passed away of cancer in 1956 at age 42.
9. The Collingwood Magpies, Hawthorn Hawks, and Carlton Blues all belong to which sports league?

The 2004 Grand Final was won by the Port Adelaide Power over the Brisbane Lions. Also in 2004, St. Kilda's Fraser Gehrig won the Coleman Medal for most goals kicked. Chris Judd also won the Brownlow Medal.
10. Which Major League baseball player won his seventh Most Valuable Player award in 2004?

Bonds won this fourth with San Francisco Giants in 2004, after winning three with the Pittsburgh Pirates in the 1990s. Barry was in his 19th season. He won the award in 2004 over runner-up Adrian Beltre of the Los Angeles Dodgers.
Source: Author Nightmare 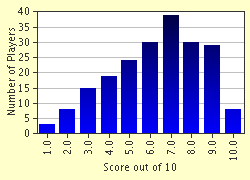