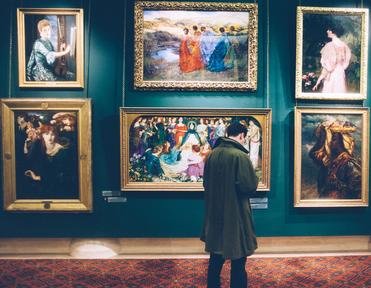 Cyclorama comes from the Greek word "cycl" meaning "circle" and "orama" which means "to view". Once a great source of entertainment, these "Imaxes" of the 1800s have since declined in popularity, although several still exist today as tourist attractions.

Quiz Answer Key and Fun Facts
1. What type of view is the cyclorama designed to give the observer?


Answer: A 360 degree view of the exhibit

The intended effect of the large cylindrical painting is to place the viewer in the midst of the historical event or famous place being displayed in a panoramic setting. The first cyclorama was reportedly put on display after the Franco-Prussian War (1870-1871) either in Munich, Germany or possibly in Edinburgh, Scotland. Irish inventor Robert Barker is credited with inventing the cyclorama.
2. What led to the cyclorama's decline in popularity in the early twentieth century?


Answer: The invention of motion pictures

Cycloramas reached the height of their popularity around the end of the 19th Century. However, by the early 1900s, the motion picture industry began to have a devastating effect on this early form of virtual reality and the number of displays declined significantly. By the beginning of the 21st century only about thirty cycloramas existed worldwide.
3. What did cyclorama investors do to compete with other forms of entertainment?


Answer: Added all of these

Investors tried many different ideas to compete with the motion picture industry. Sometimes their new concepts met with disastrous results. The wax figures used in the dioramas coupled with the use of pyrotechnics caused several buildings to burn. Besides the advent of motion pictures, other factors led to the demise of cycloramas including transportation costs, the need to have a uniquely shaped building, and the expense of producing the artwork. By 1930 most cycloramas had disappeared.
4. The longest cyclorama created was about one and a half miles long. What famous American river did it depict?

Panoramic artists would re-create scenes that most people would never be able to see in person. The cyclorama depicting the Mississippi River allowed patrons to take a three mile round trip tour in a tunnel surrounded by massive artwork that illustrated the mighty river from its start at Lake Itasca to the fertile delta in Louisiana.
5. "Behalt" is a cyclorama located in Berlin (Holmes County), Ohio. It depicts the heritage of what group of people?


Answer: The Amish and Mennonite people

"Behalt" means "to keep or remember". Referred to as the "Sistine Chapel of the Amish and Mennonites" this display presents the history of this religious group from their Anabaptist beginning in Zurich, Switzerland, in 1525, to their settlement in modern day America.
6. Many cycloramas depicting events of the US Civil War were created in the late 1800s but only a few survive today. One depicts Pickett's Charge. In what battle did this famous charge take place?

Paul Dominique Philippoteaux, a French artist who was famous for creating many panoramic paintings, visited the battlefield several times, took many panoramic photos and hired over twenty assistants to help him in his project. The 365 by 42 feet painting first appeared in Boston drawing huge crowds.

It was removed in 1891 and laid in unprotected storage for over eighteen years. After it was rediscovered it was sent to Gettysburg where it was displayed in an unheated building for over forty-five years.

In 1962 it was moved to a better yet still inadequate facility. Finally in 2003 serious restoration and preservation of this masterpiece finally began along with the development of a state-of-the-art climate-controlled facility. It is on display at the Gettysburg National Military Park Cyclorama Center.
7. The Cyclorama of Jerusalem depicts the crucifixion of Jesus Christ. Where would you need to go to visit this beautiful work of art?

Paul Philippoteaux was also chosen the leading artist in this project. In 1882, after four years of work the painting was finished in Munich. 110 meters (360 feet) long and 14 meters (45 feet) high, the painting was shown throughout Europe before being displayed in Montreal. In 1895 it was set up as a permanent exhibition in St. Anne de Beaupré.
8. The Metropolitan Museum of Art in New York City has a pre-Civil War cyclorama that depicts a famous palace. What is the name of this famous cyclorama?


Answer: Panoramic View of the Palace and Gardens of Versailles

American artist John Vanderlyn, who painted it in 1818 and 1819, first displayed his masterpiece near New York's city hall. After a lukewarm response he attempted to make some money by taking the cyclorama on tour. After his death the artwork was given to the Metropolitan Museum.

The size of the cyclorama is 12 feet X 136 feet (3.6 X 59.5 meters) and is displayed in the American Wing of the museum.
9. The "Panorama de la Bataille" near Waterloo, Belgium depicts the defeat of what historic world leader?

This cyclorama was created in 1912 by artist Louis Dumoulin and is 360 feet long and 39 feet high. The display, now enhanced by quadraphonic sound, depicts the last battle of Napoleon Bonaparte. This defeat ended his rule as emperor of France. The panoramic painting is displayed in the original building erected for that purpose in 1912.
10. The Atlanta Cyclorama was commissioned by Civil War Union officer John A. Logan. It depicted the Battle of Atlanta. Why did he commission this painting?


Answer: He wanted to boost his political fortunes

The cyclorama is housed in a museum in Grant Park in Atlanta. Logan commissioned the painting to help him in his political campaign for vice-president of the US in 1884. The cyclorama was created in Milwaukee Wisconsin by a team of artists led by F.W.

Heine and August Lohr. Eventually the painting became a part of a traveling circus. Ironically the circus went bankrupt while in Atlanta, Georgia. Few Georgians paid to see the painting that depicted a biased view of the harsh Union victory that eventually led to Atlanta's destruction and that promoted the heroic exploits of would-be vice-president Logan.

The circus owner sold all his animals and belongings to pay off his debts. The animals were used to start the Atlanta Zoo and the cyclorama went on display next to the zoo. Today the 42 feet-high and 358 feet-long masterpiece remains on display at the original site in a state-of-the-art facility.
Source: Author bigwoo 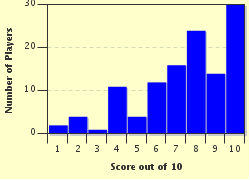