Hall Of Fame Who's Who Trivia Quiz

Baseball: no obvious players here. You really have to know your stuff for this one.

Quiz Answer Key and Fun Facts
1. This speedster played 18 years with the Cubs and Cardinals. When he retired, he held the record for 118 stolen bases in a season and 938 in his career.

His 118 steals in 1974 came at the age of 35. He was also at both games that Rickey Henderson broke his records.
2. Although Abner Doubleday is credited with creating the sport, this man was the true founder when he set up the first 20 rules of the game for the New York Knickerbockers.

Although the Hall of Fame is in Doubleday's hometown of Cooperstown, New York, Cartwright, not Doubleday is enshrined in the Hall.
3. This man was the first sportswriter elected. He was the first to write instructional books on the game and invented the box score.

Chadwick's expertise on the game was so profound that umpires frequently stopped play to ask him about a rule interpretation.
4. Had he not lost four years to World War II, this Indian, who began his career at the age of 17, might have been statistically one of the greatest pitchers of all time. He was still able to lead the league in wins 6 times.

In 16 exhibition games against major league teams, he hit .424 with 5 homeruns. He also hit one out of Yankee Stadium.
6. Known to lay down the law, this first commisioner banned 8 members of the White Sox in the 1919 Black Sox scandal and suspended Bath Ruth for 40 days in 1922 for barnstorming.

He also once ejected Joe Medwick from a 1934 World Series game after Medwick was pelted by objects from Detroit fans.
7. This Umpire was best known for his booming voice and animated hand signals. He umpired seven All-Star games and was in the majors for 27 seasons.

He was also the youngest umpire in the majors at 26.
8. This Detroit legend played for 21 from 1953-1974, and led his team to the 1968 World Series championship even after breaking his leg in mid-season. He also played in 18 All-Star Games.

Kaline was over or near a .300 batting average for his entire career and became just the 12th player with 3,000 hits.
9. This New York Giant became a legend in the 1934 All-Star Game when he struck out five future Hall of Famers, including Ruth, Gehrig, and Jimmie Foxx. His deadly screwball earned him 2 MVPs and 253 wins.

'King Carl' also set a record with a personal 24-game winning streak.
10. This Baltimore vacuum is considered the greatest defensive third baseman ever. His .971 career fielding average is the best among his position. His showcase was the 1970 World Series when he took home the MVP.

Robinson won a record 16 Gold Gloves in a row and was the 1964 ALMVP.
11. This legendary Shortstop and First baseman can be summed up in 2 words. 'Mr. Cub'.

Banks never led the Cubs to a World Series, but he did hit 40 homers five times, and had 100 RBIs 8 times. He finished 13th all time with 512 homeruns.
12. This legend is considered one of the greatest and most colorful managers of all time. In his 12-year tenure with the New York Yankees, he managed them to 10 pennants and 7 World Series victories.

His 31 year managerial career was preceded by a 14-year career as an outfielder. As a manager, he headed the Brooklyn Dodgers, Boston Braves, and the New York Mets as well.
13. This Cardinal superstar was one of the best second basemen in the 1950s. Although his strength was defense, he still collected 2,449 hits and 1,223 runs. His unusual name is similar to that of a current Anaheim pitcher.

Despite being stricken with tuberculosis in 1958 Schoendienst continued to play for another 5 seasons. And that Anaheim pitcher's name is Scott Schoeneweis.
14. To this date, this Boston and Milwaukee ace is the winningest left hander ever with 363 wins. He led the National League in that category 8 times. He is also eighth all time in innings pitched with 5,243.2.

Spahn and teammate Johnny Sain combined inspired a famous refrain, 'Spahn and Sain, and pray for rain.'
15. As many people know, Hank Aaron broke Babe Ruth's home run record in 1974, but who did Babe Ruth beat? He was a superstar in the late 1800s with the New York Giants. He is also currently fifth all time in triples with 233.

In his 17 year career, Connor was one of the most respected in the game. However, he was largely forgotten after his death in 1931.
16. This Philly great holds the record for strikeouts by a left-hander with 4,136. In 1972, he went 27-10 for a team that barely won 60 games. He is one of only three pitchers to win four Cy Young Awards and the only one in the Hall of Fame.

Carlton won 20 games six times and threw over 250 complete games. His 329 wins are second all time for left handers.
17. This Negro League legend played for 21 years, before he made his major league debut at the age of 42. Although skeptics say he was really closer to 50 when he was called to pitch by manager Lou Boudreau.

Although his recorded birthday was in 1906, Ted Radcliffe who played in the Negro Leagues was in 1902, and said that he was younger than Paige.
18. This Dodger great was an intimidating, hard-throwing strikeout artist. He fired six shutouts in a row, won over 200 games, and led the NL in strikeouts three times. Yet he only won one Cy Young award.

'Big D' won 25 games in 1962 to win his only award. He was somewhat over-shadowed by the other fireballer, Sandy Koufax.
19. This Cardinal great was as frightening to watch as he was to hit. After he led St. Louis with 3 wins in the 1967 World Series, he came back to post a 1.12 ERA in 1968, the best in modern baseball.

Although he lost game 7 of the 1968 series, Major League Baseball lowered the pitcher's mound from 18 inches to 10 inches after the year
20. This superstar with Boston and Cleveland is considered the greatest fielding centerfielder ever. During his 21 year career he amassed a .345 lifetime batting average and 792 doubles.

The Grey Eagle hit better than .375 six times and collected 3,514 hits to put him fifth all time in that category.
21. As the first man to win the Cy Young award in both leagues, this man won 314 games and never made the World Series. He and his brother combined for 529 victories.

Perry played for eight teams in his career and was well known for throwing a spitball. Although he says he rarely threw it.
22. This man is considered the greatest all-around third baseman ever. He won 10 gold gloves, hit 548 homers, and stole 174 bases all in 18 years with the Phillies.

Although his lifetime average was only .267, he was a 12-time all-star and had a career .380 on-base percentage.
23. This Negro League star could score from second on flyouts, and beat out any grounder. Satchel Paige said that he was so fast that he could switch off the light and be in bed before the room got dark.

Although his official lifetime average is .338, those stats are incomplete. Many believe it was really over .400.
24. This first baseman of the Red Sox and A's had an incredible physique and an even more powerful bat. In his 20 year career he was the first to win consecutive MVP awards, and when he retired, only Babe Ruth had more homers.

Foxx led the league in homers 4 times, batting average twice, and won the MVP a total of three times.
25. Here's a gimme. At the 1999 All-Star game, he threw out the first pitch. He is arguably the greatest hitter ever, and easily the greatest Red Sox player ever. With 521 homers and a .344 batting average very few can dispute that.

Ted Williams was a dangerous hitter right up to the end of his career. Managers would use a defense against him that put three infielders on the right side of the field. Williams still hit over .300 for 20 years.
Source: Author MrFahrenheit 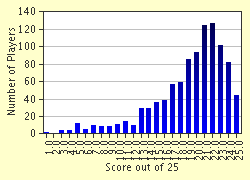 
Other Destinations
Explore Other Quizzes by MrFahrenheit