Testing your knowledge about international cricketers who have played test and one day cricket.

Quiz Answer Key and Fun Facts
1. A fearsome fast bowler, he has hurt many a batsman's toes with his in-swinging yorkers. He made his debut in 1985 and retired in 2003. His impressive career record reads, 414 wickets in 104 matches and an amazing 502 wickets in 356 one day internationals. A little known fact about this great bowler is that he was a diabetic. Who is he?

Wasim Akram is without doubt one of the all-time great fast bowlers. He was the first bowler to take 500 wickets in one day matches. Apart from his bowling, he was also known for his batting, having scored almost 3000 runs in both test and ODI's, with 3 centuries in test cricket. Akram was known for his unplayable in-swinging yorkers, which would either rattle the stumps or the batsman's toes.

A diabetic, he has been involved in many campaigns for diabetes awareness. He has been the first bowler to take two hat-tricks in both test and ODI cricket.

He has won seventeen one day man of the match awards and his test century (257 against Zimbabwe) contained a record 12 sixes. Since his retirement, he has worked as a commentator with ESPN-Star Sports network.
2. Probably one of the greatest batsmen of all-time, this little master has to his credit more than 35 centuries in both forms of the game. UK Premier Gordon Brown suggested that he should be knighted for his achievements. Who is this legendary batsman?

Sachin Ramesh Tendulkar is known as 'The Master' for his exploits with the bat. He made his debut as a 16 year old in 1989 against Pakistan. He has innumerable records to his credit, having scored more than 11,000 runs in test matches and a whopping 16,000+ runs in one day cricket.

He has more than 35 centuries in both forms of the game (which none of the other batsmen mentioned in the options have scored). He can also bowl (off-spin, leg-spin and medium pace) and has taken 150+ wickets in one day cricket. Still going strong (as on April 2008), he received kudos for his exploits in the 2007-08 Indian tour of Australia.

In January 2008, the UK Prime Minister Gordon Brown suggested that Sachin could be knighted for his achievements in the game.
3. Born in 1966, he was one of the all-time great fast bowlers. He has taken 330 wickets in 72 tests and 272 wickets in 164 one day matches. He played his first match in 1992, and retired in 2002 and has hence served as a cricket commentator and also been a bowling consultant for the English cricket team. Can you identify him?

Allan Donald nicknamed 'White Lightning' debuted in 1992 and in a span of 10 years picked up 300 plus wickets in test cricket. He was known for his fearsome bowling and has helped his team South Africa to many a win. After his retirement, he served for some time as a bowling consultant for the English cricket team.

After retirement, he has also worked as a commentator for channels like SABC and ESPN.
4. A tall middle order batsman, he has scored 7515 runs in 110 matches, with 19 centuries and 39 half-centuries. He is regarded as one of the most successful cricket captains of all-time. He led his side to become the dominant side in cricket and has to his credit a run of 27 matches without defeat, with 11 wins in succession. Who is this great batsman?

It was under his captaincy that the West Indies won the 1975 and 1979 world cups and was the runner up in the 1983 World Cup. After his retirement, he served as a match referee for the ICC and also worked as cricket manager of the West Indies cricket team.
5. Born in 1954, this opening batsman captained his country and served successfully as coach of another nation. He has scored 5334 runs in 82 tests with 12 centuries. He served as coach for a World XI team in 2005. Who is he?

John Wright was captain of the New Zealand cricket team and after his retirement, he was a successful coach for the Indian cricket team from 2000 to 2005. During his tenure, India won many matches overseas and also tied their test series in Australia in 2003-04 and was runner up in the 2003 World Cup. He quit as coach of the Indian team in 2005 and has since worked as a commentator.
6. One of the great fast bowlers, he could shake any batsman with his fierce bouncers. He had a fantastic bowling average of 20.94 and his tally reads 376 wickets in 81 matches. Sadly, he died young at the age of 41, succumbing to colon cancer. Who was this legendary fast bowler?

Malcolm Marshall was a short man (compared to other fast bowlers) who played for the West Indies. He was known for his fierce and intimidatory bowling. He made his debut in 1978/79 and retired after the 1992 World Cup. He was at his peak during the 1980s, especially troubling England.

His bowling average of 20.94 was considered as one of the best in the world. He worked as coach for the West Indies after his retirement.
7. A great opening batsman, he was known for his ability to occupy the crease for long times. He scored 8114 runs in 108 tests with 22 centuries and 42 fifties. Known for his outspoken and incisive style, he has been a successful commentator since his retirement. An interesting fact about him is that he faced the first ball in one day cricket. Can you identify him?

Geoffrey Boycott is known as one of the all-time great cricketers. During his career playing for England from 1962 to 1986, he was known for his dour batting style and his ability to occupy the crease for long times. He was the Wisden Cricketer of the Year in 1965, and has an impressive average of 47.72 in test cricket.

He was known for his clashes with Ian Botham and is a well known and liked cricket commentator. He has worked with television. The characteristic feature of his commentary is his no-holds barred style. An interesting trivia is that, he was the batsman to face the first ball in one day cricket, and was also the first batsman to be dismissed in ODI cricket.
8. Born in 1965, he was known as a great batsman and a successful captain. He has scored 10,927 runs in 168 tests and 7,569 runs in 325 ODI matches. One of his captaincy records includes 12 successive test wins. He came into the forelight in the 1987 World Cup with his bowling exploits. Who is this all-time great?

Steve Waugh was captain of the Australian test team from 1999 to 2004. Nicknamed as 'Tugga' and 'Iceman', he had an average of 51.06 in test cricket with 32 centuries and 50 fifties. As captain of the Australian test team, he was known for his leadership abilities and introduced the theory of 'mental disintegration'. One of his captaincy records included 12 successive test wins (breaking Lloyd's record).

He is also known for his charity works in Calcutta.
9. An elegant left handed batsman, he has a test average of 44.25 with 8231 runs in 117 matches. After his retirement, he became a well known commentator and presenter. He also captained his country. Who are we talking about?

David Gower, born in 1957, played cricket for England and was also captain of the England team. This left handed batsman was known for his elegant and somewhat lazy style of batting. In 117 tests, he scored 8231 runs, with 18 centuries and 39 fifties. Since his retirement, he was a well known commentator and presenter for Sky Sports.
10. Regarded as the greatest one day batsman of all times, he dominated bowlers throughout his career. He scored 8540 runs in 121 tests at an average of 50.23 and in one dayers has scored 6721 runs at an average of 47. Who is the great batsman?

Isaac Vivian Alexander Richards or Viv Richards, as he is more popularly known, is regarded as one of the greatest batsman of all-time. Nicknamed as 'Master Blaster' and 'Smoking Joe', Viv Richards was named as the greatest ODI batsmen by Wisden in 2002. Known for his trademark swagger and his habit of chewing gum, his very presence on the cricket field would unnerve opposition bowlers.

He made his debut in 1974 and captained West Indies from 1980-1991. Post-retirement, he has been involved in promoting the game at various levels.
Source: Author deepakmr 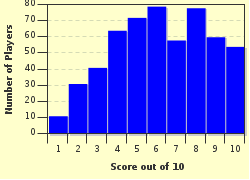