See how many of this list of the world's top cricketers you can identify. Good luck!

Quiz Answer Key and Fun Facts
1. Wicket keepers were the backbone of any cricket team and even more valuable if they could bat as well as catch the ball. Most usually they batted well down the order. Which keeper often opened the batting and scored more than 5000 runs in 97 Test matches for Australia between November 1999 and January 2008?

Born in new South Wales on November 14, 1971, Gilchrist also took 379 catches and made 37 stumpings. His runs came at an average of 47.60.
2. One of the top run scorers in the history of Test cricket was a star of India that they called 'The Little Master'. Who is he?

Sachin Ramesh Tendulkar was born on April 24, 1973, in Mumbai, India. In 159 Test matches between November 1989 and April 2009, he scored 12,700 runs at an average of 54.58. In that total were 42 centuries and 53 half-centuries. He also took 44 wickets.
3. He was the only cricketer ever to captain both the 'Gentlemen' and the 'Players' and once took 10 wickets for his county, Gloucestershire, in one match, a record that remained intact 80 years after it was set in 1928. Who was the Englishman who combined batting power with devastating spells of bowling, as well sharp hands?

Walter Reginald Hammond was born on June 19th 1903 in Dover, England, and died on July 1, 1965, in Kloof, KwaZulu-Natal, South Africa. In 85 Test matches between December 1927 and March 1947, he scored 7249 runs at an average of 58.45 and took 83 wickets. Cricket once involved teams of 'Gentlemen' (amateurs) and Players (professionals). Before Hammond, the amateurs and pros did not play in the same teams.
4. To his contemporaries, he was the greatest bowler of his time and claimed 189 wickets in 27 tests, all played before between 1901 and 1914. Which giant of the English game was this?

Sydney Francis Barnes was born on April 19, 1873, in Smethwick, Staffordshire, England, and died on December 26, 1967, in Chadsmoor, Staffordshire. He played in just 27 Test matches, but took 189 wickets at the modest average of 16.43. In seven of those he took 10 wickets in a match.
5. The faster the bowling, the better the cricketer nicknamed 'Master Blaster' liked it. Which Antigua native was knighted for his services to the sport?

Sir Isaac Vivian Alexander Richards was born on March 7, 1952, in St Johns, Antigua. In 121 Tests between November 1974 and August 1991, he scored 8540 runs at an average of 50.23 and took 32 wickets. He was a powerful batsman against pace bowling.
6. For 30 years, a player nicknamed 'The Master' kept bowlers frustrated, yet he was held in high regard by all who played with him, against him, or wrote about him. Who was this Englishman who played Test cricket in the 1930s and was the first player from his nation to be knighted?

Sir John Berry Hobbs was born on December 16, 1882, in Cambridge, England, and died on December 21, 1963, in Hove, East Sussex. In 61 Test matches between January 1908 and August 1930, he scored 5410 runs at an average of 56.94. Before Hobbs, only Donald Bradman (Australia) and two administrators had been knighted for services to cricket.
7. Some said that spin bowling was a black art, and the man they nicknamed 'Hollywood' was arguably the king of that darkness. Which Aussie was never afraid to engage in a little gamesmanship with opponents and umpires and turned to writing about the sport in retirement?

Shane Keith Warne was born on September 13, 1969, at Upper Ferntree Gully, Victoria, Australia. In 145 Test matches between January 1992 and January 2007, he took 708 wickets at an average of 25.41 and also scored more than 3100 runs. In retirement he turned to journalism, writing for newspapers such as 'The Times'.
8. Regarded by his peers at the greatest all-rounder ever, some said a certain Barbados-born knight of the realm could bowl just about any style, and bat fiercely and with tenacity. Who was he?

Sir Garfield St Aubrun Sobers was born on July 28, 1936, at Bridgetown, Barbados. In 93 Test matches between March 1954 and April 1974, he scored 8000 runs at an average of 57.78, and took 235 wickets and held 109 catches.
9. Known as "The Doctor" to distinguish him from his cricketing brother, "The Coroner", he was a superstar of sport long before the term had come into fashion and made a fortune, not always legitimately. Which batsman, a medicine man to boot, was noted for using his fame to bully his opponents?

Dr. William Gilbert Grace was born on July 18, 1848, near Bristol, England, and died on November 23, 1915, at Mottingham, Kent, England. A qualified doctor, Grace was in name anyway an amateur, but is said to have earned more money from cricket than any professional at the time. His Test batting record was a modest 1098 runs from 22 games, but it was an overall contribution of 44 years in first class cricket for which he is remembered. He was also noted as a bully who insisted on getting his own way. W.G. Grace was a surgeon, and his brother E.M. was a coroner.
10. Widely regarded as the best Test cricketer who has ever played the game, who was the genius known to his legion of fans as 'The Don'?

At the height of his career, his batting prowess rendered most bowlers almost helpless. When England arrived in Australia for the 1932-33 Test series, they devised the infamous "bodyline" style of bowling to counter Bradman. Traditionally, bowlers had aimed to hit the wickets, but in bodyline they bowled directly at the batsmen, hitting many of them.

It was a brutal form of cricket, but while it worked against lesser batsmen, it was quickly mastered by Bradman.
Source: Author darksplash 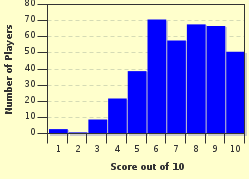