A quiz on the NFL playoffs, focus is generally on the 80s and 70s. Should be faily easy for someone who enjoys American football.

Quiz Answer Key and Fun Facts
1. The Redskins played in 3 Super Bowls in the 1980s?

They played against the Dolphins, Raiders and the Broncos.
2. What team was the first to lose 4 Super Bowls in consecutive seasons?

They came close against the Giants in 1991, but lost 20-19. They then lost the next three Super Bowls.
3. Which team won Super Bowl III?

The next appearance by Dallas was 7 years later.
7. The Redskins or the 49ers appeared in the NFC Championship Game every year from the 1981 season to the 1994 season? 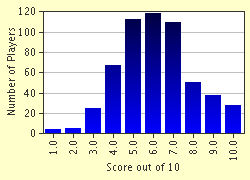 
Other Destinations
Explore Other Quizzes by struction