How much do you know about Super Bowls? | Quiz

Here is a quiz about the Super Bowl. I hope you'll enjoy it.

Share on Facebook
Share on Twitter
Share by E-Mail
Author
Budweiser8
Time
3 mins
Type
Multiple Choice
Quiz #
167,984
Updated
Dec 03 21
# Qns
10
Difficulty
Average
Avg Score
6 / 10
Plays
790
This quiz has 2 formats: you can play it as a or as shown below.
Scroll down to the bottom for the answer key.

Quiz Answer Key and Fun Facts
1. Which Washington Redskins quarterback did NOT win a Super Bowl?

Jerry Rice was drafted in 1985 out of Mississippi Valley State.
3. In Super Bowl XXII, how many points did the Washington Redskins score in the second quarter?

The Redskins won the game over the Denver Broncos, 42-10.
4. How many turnovers did the Buffalo Bills have in Super Bowl XXVII against the Cowboys?

Derrick Jensen blocked a Redskin Punt and scored a touchdown, the Raiders won the game, 38-9.
6. Who was the MVP of Super Bowl V?

But the Cowboys lost to the Baltimore Colts on a Jim O'Brien game-winning field goal in Super Bowl V, 16-13.
7. Who was the starting quarterback for the Broncos in Super Bowl XII?

The Broncos lost to the Cowboys in Super Bowl XII at the Louisiana Superdome.
8. What stadium hosted Super Bowl XXXIII?

The Rose Bowl is located in Pasadena, California.
10. What was the final score in Superbowl XXXV?

This quiz was reviewed by FunTrivia editor Nightmare before going online.
Any errors found in FunTrivia content are routinely corrected through our feedback system.
Most Recent Scores
Jan 08 2023 : hipsterjc: 0/10
Dec 26 2022 : Guest 98: 8/10 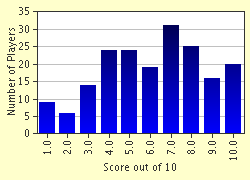 
Other Destinations
Explore Other Quizzes by Budweiser8