This is a little quiz on Super Bowl MVPs.

Quiz Answer Key and Fun Facts
1. Who was the MVP of Super Bowl XXXVII?

The Green Bay Packers won the first two Super Bowls, beating Kansas City and Oakland.
3. When the Baltimore Ravens beat the New York Giants in Super Bowl XXXV, who was given MVP honors?

The Ravens beat the Giants 34-7 on January 28th, 2001, at Raymond James Stadium in Tampa, Florida.
4. In Super Bowl XXXIV, which Ram was named MVP?

St. Louis defeated the Tenessee Titans 23-16.
5. Which one of the following quarterbacks won back to back Super Bowl MVP titles?

Super Bowl XXXVI was moved back a week, because of the September 11th tragedy.
8. Which of the following Dallas Cowboys was never a Super Bowl MVP?

San Francisco beat the Cincinnati Bengals 20 - 16. Superbowl XXIII was played in Joe Robbie Stadium in Miami, Florida.
10. Who was the MVP when the Chicago Bears beat the New England Patriots in Super Bowl XX? 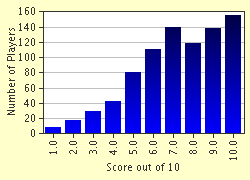 
Other Destinations
Explore Other Quizzes by Sarah606