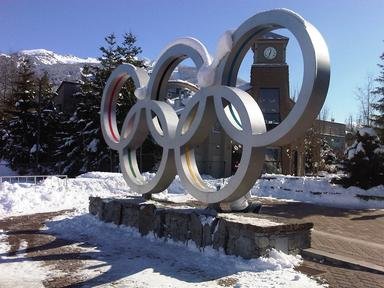 This was the motto of the 21st Winter Olympics, held in February of 2010 in Vancouver, British Columbia. How much do you remember of the events that transpired at these games, whose logo was Ilanaaq the Inukshuk?

Share on Facebook
Share on Twitter
Share by E-Mail
Author
looney_tunes
Time
4 mins
Type
Multiple Choice
Quiz #
394,669
Updated
Dec 03 21
# Qns
10
Difficulty
Average
Avg Score
7 / 10
Plays
228
Awards
Top 35% Quiz
This quiz has 2 formats: you can play it as a or as shown below.
Scroll down to the bottom for the answer key.

Quiz Answer Key and Fun Facts
1. The Vancouver 2010 Games logo was a humanoid stone cairn whose name meant "friend". Which of the mascots for the 2010 Winter Olympics and Paralympics was a Bigfoot?

All four of these images were inspired by the traditions of First Nations people. Quatchi and Miga were the mascots for the 2010 Games, Sumi for the Paralympics, and Mukmuk hung around for both Games as an official sidekick. Quatchi was a sasquatch (a large ape-like being of the Pacific Northwest, sometimes called Bigfoot) who sported blue earmuffs. Miga was a sea bear, a cross between an orca and a Kermode bear, also known as a spirit bear, the official state mammal of British Columbia. Mukmuk was modeled on a kind of marmot endemic to Vancouver Island BC which is critically endangered. Sumi, dressed in green, had the wings of a Thunderbird and the legs of a black bear.
2. What stadium underwent extensive renovations so that it could host the opening and closing ceremonies of the 2010 Winter Olympics?

Located on the north side of False Creek in Vancouver, BC Place Stadium opened in 1983 with (at the time) the world's largest stadium with an air-supported (inflatable) roof. After the Winter Olympics, the roof was replaced by a cable-supported retractable roof.

The opening ceremony, on February 12, was the first indoor opening ceremony for an Olympic Games. The games were officially opened by Governor General Michaëlle Jean. The ceremony included recognition of the four First Nations groups indigenous to the region, and representatives issued a welcome to the world before the parade of athletes.

Then followed the usual cultural display featuring a range of famous Canadians highlighting the diversity of the nation, culminating in the athletes' oath, the raising of the Olympic flag and the lighting of the cauldron.

This last experienced an equipment failure (only three of the four arms functioning properly) which was incorporated into the closing ceremony.
3. The Olympic Flame arrived at the opening ceremony carried by Rick Hansen, and was then shared by four final torchbearers, who were planned to ignite the four separate sections of the Olympic Cauldron. Due to an equipment malfunction, which one of the final four was unable to light their designated arm?

Rick Hansen (a Paralympian who had previously participated as a torchbearer in 1988 at Calgary) lit the torch of Catriona Le May Doan (a double gold medallist in 500m speed skating), who lit that of Nancy Greene (an alpine skier who was voted Canada's Female Athlete of the 20th Century in a popular poll), who lit that of Wayne Gretzky (professional hockey player known as "The Great One"). When one of the arms failed to rise, Catriona Le May Doan was unable to light the cauldron. This was "fixed" in the closing ceremony, when a mime pretended to repair the arm, and she lit it at the start of the closing ceremony.

Following the lighting of the Indoor Cauldron, Wayne Gretzky carried his torch out of the stadium and across town to Coal Harbour, where he lit the Outdoor Cauldron, becoming the first person to light two official cauldrons in the same Olympic Games.
4. Which of these events, proposed for inclusion at the 2010 Winter Olympics, was not actually included in the final program of events?

Women's ski jumping was a rather controversial exclusion, fought all the way to the Supreme Court of British Columbia. As a sort of compensation, the organisers of the games organised several women's competitions at the Olympic venue in the months before the Games. The event was added to the program for the 2014 Sochi Games.

There are always a number of events that request to be included, and only a few can be added. In Vancouver, ski cross made its debut, while team skeleton, team luge, team alpine skiing, mixed doubles curling and mixed biathlon relay events all had their applications turned down.
5. What was the name of the nearby winter resort town where the alpine skiing events were held?

Whistler Creekside was the site of the alpine skiing events - downhill, slalom, giant slalom, Super-G and super combined. The Whistler Sliding Centre (on Blackcomb Mountain) was the venue for luge, bobsleigh and skeleton competition. The Nordic events (biathlon, cross-country skiing and ski jumping) were held at the Whistler Olympic Park, which was actually located a bit south of Whistler Mountain, in the Callaghan Valley. Freestyle skiing and snowboarding events were held at Cypress Mountain in West Vancouver.
6. In what sport did Aleksei Grishin win Belarus' first Winter Olympics gold medal?

Aleksei Grishin had previously represented Belarus in 1998 (Nagano), when he finished in eighth place, 2002 (Salt Lake City), when he won Belarus' only medal with a bronze, and 2006 (Turin) when he came fourth. In 2014 (Sochi) he was the Belarusian flagbearer, but failed to qualify for the finals in the aerials event, which was won by his compatriot Anton Kushnir.

Vancouver also saw Slovakia win their first gold medal at a Winter Olympics, when Anastasiya Kuzmina won the women's biathlon sprint.
7. In 2010, Canada won its first gold medal in an official sport at an Olympic Games for which they were the host nation. In what event did this occur?

Alexandre Bilodeau, won gold on 14 February, the second day of competition, having finished in twelfth place at the Turin Olympics in 2008. Bilodeau finished the qualification run in second place, and produced a blinder in his final run, which included both a back double full jump and a back iron cross as he produced the fastest run. He later went on to defend his title in 2014 at Sochi, becoming the first Olympian from any country to successfully defend a freestyle skiing title.

Canada had won the Women's Curling at Calgary in 1988, but it was only a demonstration event at that time. They came second in Vancouver.
8. Canada was the first host nation ever to win the most gold medals in a Winter Olympics.

The first host team to top the tally of gold medals for a Winter Olympics was the United States, with six gold medals in the 1932 winter Olympics held in Lake Placid, New York. Prior to that, Norway had led the table in both 1924 and 1928, a feat they repeated in 1936.

In 1948 they shared the lead with Sweden, and in 1952 they again took top spot in their home games in Oslo. That was the last time a host city managed to come first until Canada did so in 2010, with 14 gold medals in Vancouver.
9. Canada's winning number of gold medals in Vancouver 2010 was the most won by any nation in a single Winter Olympics. How many gold medals did they win?

Canada won 14 gold, 7 silver and 5 bronze medals, for a total of 26. The previous highest number of gold medals won by any country was 13, shared by the Soviet Union (at Innsbruck in 1976) and Norway (at Salt Lake City in 2002).
10. Which country won the most medals overall at the Vancouver winter Olympics in 2010?

This was the second time that the United States topped the overall medal count, having done so previously in 1932 at Lake Placid. Their 37 medals broke the previous record for the most medals at a single Winter Olympics, previously held by Germany, who won 36 medals in 2002 at Salt Lake City.

These numbers are notably smaller than those associated with the Summer Olympics, in which many more events are contested.
Source: Author looney_tunes

This quiz was reviewed by FunTrivia editor gtho4 before going online.
Any errors found in FunTrivia content are routinely corrected through our feedback system.
Related Quizzes
This quiz is part of series Globetrotting 3: