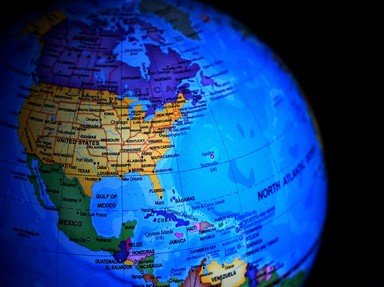 The term Mesoamerican refers to cultures that developed in a region that extended from central Mexico to Costa Rica before the time of Spanish colonization. Match each of these sites with the culture considered responsible for building it.

Share on Facebook
Share on Twitter
Share by E-Mail
Author
looney_tunes
Time
5 mins
Type
Match Quiz
Quiz #
393,453
Updated
Dec 03 21
# Qns
10
Difficulty
Tough
Avg Score
6 / 10
Plays
258
Awards
Top 35% Quiz
Mobile instructions: Press on an answer on the right. Then, press on the gray box it matches on the left.
(a) Drag-and-drop from the right to the left, or (b) click on a right side answer box and then on a left side box to move it.

Quiz Answer Key and Fun Facts
1. Pyramid of the Sun

Our tour starts with the third-largest ancient pyramid, behind the Pyramid of Giza and the Great Pyramid of Cholula. The Pyramid of the Sun is the central feature of a large complex in the city of Teotihuacan, which includes the Pyramid of the Moon and the Feathered Serpent Pyramid, both located at opposite ends of a wide thoroughfare called the Avenue of the Dead. All of these names were given to the structures by the Aztecs, who arrived in the region nearly 1000 years after the city was destroyed, in 550 CE.

We have little evidence of the exact nature of the culture of Teotihuacan (the Aztec name for the city, which means something like 'birthplace of the gods'); it appears to have had diverse ethnic groups from surrounding regions, including Otomi, Zapotec, Mixtec, Maya, and Totonac people. The latter group claim to have built the city, but scholars are not agreed on this, and most consider the more general term Teotihuacan, referring to the entire mix of people in the city, as being the most appropriate attribution.
2. The Votive Pyramid at Alta Vista

Like many other Mesoamerican sites, Alta Vista is a mixture of structures with astronomical and religious functions. Built between 200 and 1000 CE, it includes the Moon Plaza, the Ladder of Gamia and the Labyrinth (set up to highlight the equinoxes and solstices).

The Votive Pyramid is covered with inscriptions, whose interpretation is the subject of ongoing (and sometimes disputed) research, but which clearly indicate the religious nature of the structure, which was probably surmounted by a temple.
3. Templo Mayor in Tenochtitlan

The Templo Mayor (Greater Temple) was the most significant structure built by the Aztecs in their capital city, which is now a part of Mexico City. The temple has two shrines on top of the pyramid, the red one on the south side dedicated to Huitzilopochtli (the god of war) and the blue one on the north side to Tlaloc (the god of rain and agriculture).

The pyramid is said to be located on the spot where Huitzilopochtli indicated to the Aztecs that they had arrived at the land where they were to establish their empire.

It was built in multiple stages, with the seventh being the one that Cortes saw and destroyed around 1520.
4. Great Pyramid of Cholula

The largest pyramid in the New World (by volume - the Pyramid of the Sun is taller, 75m to 66m) was built in multiple stages, over an extended period from around 250 BCE to around 850 CE. For this reason, the attribution of its construction is generally left as the generic Mayan, and not to any one more specific group.

The Nahuatl name for the pyramid is 'Tlachihualtepetl', which means made-by-hand mountain. Today, the pyramid appears, when seen from a distance, to be a natural hill, surmounted by a church which the Spanish built there in 1594.

The original temple is believed to have been dedicated to the god Quetzalcoatl.
5. Yácata pyramids of Tzintzuntzan

Unlike most Mesoamerican pyramids, these five pyramids sitting on a large platform (450m by 250m) dug into the side of a hill are rounded in form, not square-based. The word yácata refers to their construction technique. They are built with a rubble core, on the outside of which stone slabs covered with a range of geometric designs and other carved symbols have been placed.

They are not mortared, nor do they seem to have been covered by any material such as stucco to keep them in place - they are just carefully wedged together. Until the 19th century, most archaeologists believed that the Purépecha people had built little in the way of monumental architecture, and the excavation of this site, which began in the 1930s, has provided most of what we know about them.
6. El Tepozteco

This is not one of the most impressive monuments in this quiz, but I couldn't resist including a temple to Tepoztecatl, the Aztec god of pulque, an alcoholic beverage made from the sap of the agave plant. The Aztecs considered this milky-looking drink to be part of sacred rituals; Spanish colonisation led to its more widespread consumption, although its popularity has been surpassed by beer during the 20th century.

It is also one of the most recent constructions - although the date is not certain, it is believed to fall somewhere between 1450 and 1500, making it just qualify temporally as pre-Columbian.
7. Pyramid of the Niches in El Tajin

El Tajin was an important centre from around 600 to 1200 CE, but was destroyed early in the 13th century, and Europeans remained unaware of its existence until the accidental discovery of the Pyramid of the Niches in 1785. This pyramid is so named because of its unusual design, which includes a total of 365 decorative niches (plus more in the later addition of a stairway on the east face), spread through the seven stories of the pyramid.

The niches were painted black, in contrast to the red used for the surrounding structure.

This was apparently meant to make them resemble caves leading to the underworld, an effect which is increased by the addition of an overhanging ledge above each niche.
8. Pyramid of Quetzalcoatl in Tula

The centre of the Toltec empire was the city of Tollan, the remains of which form the archaeological site known as Tula. The main ceremonial area is described as Tula Grande, and it is there that the Pyramid of Quetzalcoatl is found. This Toltec god was adopted by the later Aztecs, and the worship of Quetzalcoatl, the feathered serpent god, was widespread throughout Mesoamerica at the time of Spanish colonisation.

This pyramid has five tiers, on top of which are four basalt columns, each about four metres high, which originally supported the roof of the temple that topped the pyramid.

Monte Albán does not have much in the way of the pyramids that have been featured at other sites, but its Gran Plaza holds a large number of carved monuments called the 'Danzantes' (dancers). These are mostly male figures that are grotesquely contorted, and are now thought to represent sacrificial victims.

The Gran Plaza lies between two large platforms, each reached by a massive staircase, at its northern and southern ends; the eastern and western sides are flanked by smaller platforms and mounds.

Another series of mounds runs down the centre of plaza. The platforms and mounds contained residences, temples, sacrificial altars, astronomical structures, handball courts, and other buildings necessary for the functioning of the Zapotec society in this fortified city which had been abandoned by around 1000 CE.
10. Temple of Kukulcan at Chichen Itza

Also known by its Spanish name 'El Castillo' (the castle), this step pyramid with a stairway running up each side is probably the first image most people bring to mind when they think of Mayan pyramids. Kukulcan was a Mayan deity, roughly corresponding to the Aztec deity Quetzalcoatl. Each of the stairways has 91 steps; if you count the temple platform on top of the pyramid as one more step, you get a total of 365, the number of days in the year.

This pyramid was constructed so that its sides and vertices align with significant celestial events.

While it was probably not intended, the presence of serpent sculptures running along the balustrades on each side of the stairway on the northern face provide a popular tourist event: in the late afternoon of each equinox, there is a period of time when the shadows cast by the sun create the illusion that there is a serpent crawling down the side of the pyramid.
Source: Author looney_tunes

This quiz was reviewed by FunTrivia editor stedman before going online.
Any errors found in FunTrivia content are routinely corrected through our feedback system.
Related Quizzes
This quiz is part of series Globetrotting 3: