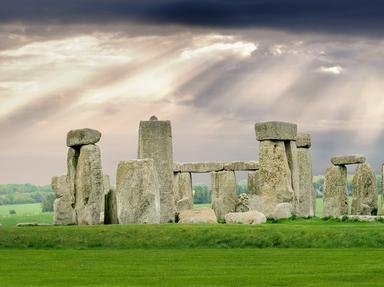 The Imperial City of Huế has seen better days, but is still a popular tourist destination.

Quiz Answer Key and Fun Facts
1. This photo shows the enclosure called the citadel, which surrounds the Imperial City of Huế. It consists of a wall and a moat whose water comes from which fragrant river?

All three of these are in Vietnam, but only the Perfume ('Huong' in Vietnamese) flows through the city of Huế. Its waters are diverted to travel around the outside of the fortifications for the citadel ('Kinh thành' in Vietnamese) which defends the Imperial City.

The citadel is roughly square in shape, two kilometres on a side, and is oriented to front on the river, roughly south-southeast. This picture is taken from the north, showing the back side of the citadel.
2. The Imperial City covers the entire area inside the walls of the citadel.

The Imperial City ('Hoàng thành' in Vietnamese) is located in the southern part of the citadel, and has its own surrounding walls, which are about 2.5 km in total length. There are a number of gates that can be used to access the Imperial City, all built to be both beautiful and functional as defensive points against any invaders.
3. This is the main gate leading into the Imperial City. It is known as the Meridian Gate ('Ngọ Môn' in Vietnamese), and also by the directional name that identifies the side of the citadel on which it is located. What is this common name?

The Meridian Gate (modelled after the one in Beijing, as are many features of the Imperial City of Huế) is built with two levels. The lower one is made of stone and brick, and is clearly made for defense. The upper level is more decorative, as befits the fact that it was from that level that the emperor would review his troops and observe ceremonial displays.

There are five entrances on the ground level: the centre one was used exclusively by the emperor, the ones adjacent to it by courtiers and soldiers, and the outer gates were used by anyone else accessing the Imperial City.
4. After entering through the Meridian Gate, you will cross the Thái Dịch Lake by means of the Trung Đạo Bridge, walk along the Esplanade of Great Salutation (Vietnamese 'Sân Đại Triều') before reaching one of the more significant buildings of the Imperial City, whose Vietnamese name is Điện Thái Hoà. Which of these is NOT an English-language name commonly used in reference to this building?


Answer: Temple of the Winds

This building dates from the beginning of the 19th century, built by the Emperor Gia Long, and first used for his coronation in 1805. The central compartment of the building is the throne room, which carries a sign with Chinese characters that translate into Vietnamese as 'Điện Thái Hoà', which in English is Palace of Supreme Harmony or Temple of Supreme Happiness (depending on whose translation you look at).

The building was used for court activities, including proceedings conducted on the Esplanade of Great Salutations, the courtyard area in front of it where large numbers of people could assemble.

This is one of the buildings that was severely damaged by American bombing in 1968 after the city had been captured by North Vietnamese fighters during the TET Offensive.
5. Inside the Imperial City is a region to which only members of the Imperial family had access. It is shown on this map outlined by a solid square. What is its regally colourful name?

If you hadn't heard of this name, perhaps the fact that the map used a purple line to outline the area might have provided a clue. Its Vietnamese name is 'Tử cấm thành'. The last emperor to live there was Bao Dai (1933-1997), nominal ruler of the area, although really little more than a puppet of the French, until the Japanese invasion of 1940, when they took control.

The politics get complicated, but once the Viet Minh started fighting for Vietnamese independence, defeating the French in 1954, Bao Dai officially became the head of state of South Vietnam, although real power was held by the Prime Minister, Ngo Dinh Diem.

The last emperor spent most of his adult life overseas, not in the Imperial City where he had grown up. He died in exile in France, and is buried there.
6. The grounds of the Imperial City contain many symbolic statues and ornamentations. This statue, called 'une licorne' in French, is seen in a number of places. What is the English name for the creature it represents?

Although bearing little resemblance to the image of a unicorn familiar from classical works of European art, this is indeed a unicorn. The other real and legendary animals are also commonly used, especially the dragon. The symbol of the unicorn is traditionally said to represent innocence and virtue. However, it is also used to indicate a defiant refusal to be captured or defeated, as a unicorn would rather die than be caught. That is its usual heraldic meaning, and most likely to be the one intended here.

The French also used this name for a Russian gun, a cross between a howitzer and a cannon, which was developed in the mid-18th century. The name was inspired by the handles on the sides of the gun barrel, which are described as unicorn-shaped.
7. This picture of part of the Imperial Pleasure Gardens shows a local topiary style called Hòn Non Bộ. Which of these is a possible English translation of this term?

Literally, 'Hòn' means island and 'Non' means mountain. 'Bộ' is a bit more ambiguous, as it can either describe something which is a combination of water, mountain and trees or be applied to anything which is a miniature reproduction of scenery.

The example here is actually rather large for a Hòn Non Bộ,but still much smaller than the scene it represents, as witness the tiny temple. The rocks have been arranged to present a mountain-like shape, and the plants suggest a forested landscape covering the island.
8. This picture shows one of the nine large urns to be found outside the building called 'Thế Miếu'. What do they represent?


Answer: The first nine emperors of the imperial dynasty

The English name for this building, also called 'Thế Tổ Miếu', is the Temple of the Ancestors. It was built by emperor Minh Mệnh in 1822-1823, and modelled (like much of the Imperial City) on the corresponding building, Taimiao, in the Forbidden City of Beijing. In Beijing there were Nine Cauldrons, invoking the power invested in the emperor by a heavenly mandate. In Huế, there are Nine Urns, destined to honour the first nine rulers of the familial dynasty which eventually rose from being warlords in control of the southern part of Vietnam to calling themselves emperors of a unified Vietnam in 1802 when victory in the 'Tây Sơn' wars meant the 'Trịnh' clan no longer controlled the northern part of the country.

Near 'Thế Miếu' is 'Triệu Tổ miếu', the Temple of the Original Ancestor, built by Gia Long in memory of Nguyễn Kim, considered the founder of the dynasty.
9. This picture shows the interior of the Temple of the Ancestors, as it has been restored in the 21st century. What imperial dynasty, reigning from 1802 until the middle of the 20th century, was responsible for building the Imperial City?

Nguyễn is now one of the most common familial names in Vietnam, with nearly half the population using it. The Nguyễn clan (Vietnamese 'Chúa Nguyễn') held sway in a part of what is now Vietnam then known as the Inner Land ('Đàng Trong') starting in the 16th century.

The Outer Land ('Đàng Ngoài') was controlled by the Trịnh clan until 1802, when the Nguyễns gained control of the whole country.
10. This is the entrance to Cung Diên Thọ (Palace of Longevity) which was built in 1804 by Gia Long for which of these purposes?


Answer: As a residence for his mother and grandmother

Over the following years, this was the house used by almost all Dowager Empresses (meaning that their son or even grandson, rather than their husband, was the current ruler). The original building was expanded, and renovated frequently, during the imperial years.

The residence survived nearly intact after the Nguyễn dynasty was ended in 1945, even though much of the rest of the Citadel was badly damaged. Although Cung Diên Thọ suffered severe damage during the 1968 TET offensive, it was one of the 16 areas of the Imperial City recognised as a world cultural heritage site in 1993.
Source: Author looney_tunes

This quiz was reviewed by FunTrivia editor trident before going online.
Any errors found in FunTrivia content are routinely corrected through our feedback system.
Most Recent Scores
Jan 01 2023 : rainbowriver: 2/10
Dec 10 2022 : Grosshaus93: 6/10

Related Quizzes
This quiz is part of series Globetrotting 3: