This is a quiz about my favorite show "Friends"! Hope you have fun taking it. Random questions about all different episodes.

Quiz Answer Key and Fun Facts
1. What instrument did Ross want to play at Chandler and Monica's wedding?

Chandler and Monica were sitting discussing the wedding and they hear a sound that Chandler describes as "the dying cat parade", only to find out it is Ross. He's planning to play the bagpipes at their wedding reception. The song he picked- "Celebration".
2. A member of what band gave Monica a hickey?


Answer: "Hootie and the Blowfish"

When Ross, Chandler, and Monica go to a Hootie and the Blowfish concert, Monica meets up with Stevie Fisher (a boy she used to babysit). Well, it turns out that Stevie is lawyer and his firm represents the band. Monica and the guys end up at a party with the band and well, the rest is history.
3. What did the candy hearts say that Janice bought for Chandler?


Answer: Chan and Jan 4 ever

Janice give these to Chandler on Valentine's day, right before he breaks up with her for the THIRD time.
4. How many long-stemmed roses did Ross send Emily?

72- one for everyday he has loved her. After he majorly screws up and the wedding and said, "I take thee, Rachel...", he had to do something to make himself look good.
5. What did Ross fall into at Nana's funeral?

All the friends run up to him and look in side the grave, after asking if he's alright Ross says, "Yeah, just having my worse fear realized."
6. Who spent time in London with Emily that really freaked Ross out?

Ross was afraid that Susan (Carol's significant other) would turn Emily gay.
7. Which friend learned to ride a bike as an adult?

Ross helps Phoebe how to learn, after trying and trying, he finally gives her training wheels.
8. Who sat at the kid table at Monica and Chandler's wedding?

This is when Ross meets Mona. All the girls want to dance with him and he misses out dancing with Mona.
9. What material did Joey "wear" to an audition to appear to be uncircumsized?

He has to be uncircumsized for the part, so he uses silly putty by molding it. Things didn't turn out so well though, the fake "thingy" fell off during his audition.
10. When Rachel runs out of candy, what does she give the trick-or-treaters?

After giving a few kids cash, Gunther shows up with more candy. The next kid that shows up tell Rachel that his friend said she had money. Things don't go so well and to get the kid to stop crying she had to give him twenty dollars and go to a few houses with him as his girlfriend.
Source: Author dsygrc 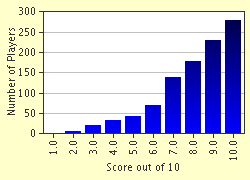 
Other Destinations
Explore Other Quizzes by dsygrc