"Friends" is one of my favorite TV shows and I have seen every episode. These questions are a mix of easy and hard. Have fun and good luck!

Quiz Answer Key and Fun Facts
1. Why were Ross and Carol asked never to return to the Magic Kingdom?


Answer: Because they were caught having sex on It's A Small World

The ride had broken down and when no one was looking they started making out. When the ride started up again, they were caught and asked never to return.
2. What were Monica, Phoebe, and Rachel trying to do on Valentine's Day?


Answer: Cleanse themselves of their past relationships

This was s in "TOW The Candy Hearts". None of the girls had dates, so they were performing a ritual to cleanse themselves of their past relationships.
3. What was the entire name of Ross and Monica's old cat?

From "TOW Ross Finds Out". Monica makes Ross say the full name in order for him to take the cat's bed and toys for the new kitten him and Julie were going to buy.
4. When Ross makes a list to decide between Rachel and Julie, what is put on the list as the only con for Julie?

This is from "TOW The List." Ross finally finds out that Rachel is in love with him and he is trying to decide who he should be with. Using Chandler's new laptop, the guys make a pro-con list for Rachel and for Julie.
5. Rachel decides to go to Paris with Ross and Emma.

Rachel gets on the plane to go, but she changes her mind and shows up at Ross' apartment and they kiss. She stays in New York with Ross and Emma.
6. What used to be Monica's nickname?

We find this out in "TOW The Embryos". This was the answer to one of the questions that Ross asked Joey and Chandler during their trivia game.
7. With what word did Ross finish this remark to Rachel: "Yeah, well, missy, you better be glad that list is _________"?

From "TOW Frank Jr." Ross made a list of five celebrities that he could sleep with. Isabella Rosilini had been on the list, but he took her off, because she was too international. At the end of the episode, she came into Central Perk and Ross said that line to Rachel.
8. What did Rachel's sister do to Emma to make her and Ross angry?

Rachel and Ross needed a babysitter and her sister volunteered. They hesitantly let her do it and she pierced Emma's ears, because she thought that it made her look more like a girl. Ross had been very against having Emma's ears pierced in the first place.
9. At Monica and Chandler's wedding, what was Chandler hiding from Monica?


Answer: That he learned how to dance for her

Chandler wanted to learn how to dance in order to impress Monica. Unfortunately, his new shoes slipped on the floor, so he couldn't dance. He ended up putting tape on the bottoms of his shoes just to show Monica what he learned. Monica was very proud of him.
10. What two actresses have played Rachel's sisters?

Reese Witherspoon played Jill, Rachel's youngest sister who thought that she would try to be on her own like Rachel, but in the end couldn't do it. Christina Applegate played her other sister Amy who is very irresponsible and spoiled (sort of like Rachel used to be, but worse).
11. Chandler falls in love with Joey's girlfriend, Kathy.

Chandler falls in love with Joey's girlfriend Kathy in season four.
12. Why does Monica break up with Pete for the final time?


Answer: Because he wants to become The Ultimate Fighting Champion

Monica really likes Pete and the fact that he is a multi-millionare helps a lot, but there was just no chemistry. She even kept trying to make it work, but couldn't, so they temporarily broke up. Then he comes back into the picture and Monica realizes that there is chemistry and they get back together. Pete then decides that he wants to be The Ultimate Fighting Champion and Monica can't bare to see him hurt and in so much pain, so she ends the relationship.
13. What actor plays Rachel's angry date who she brings to Joey's play?

In "TOW The Screamer," everyone is telling Joey how many tickets they need for his play. Ross says that he needs two, because he's bringing a date. After saying she needs one and hearing Ross, Rachel changes her number to two and says that she is bringing a date. Of course she was lying so that she could try to make Ross jealous and she ends up finding a date.

He is played by Ben Stiller who at first, only yells in front of Ross, but finally everyone catches him yelling at the Chick.
14. Monica and Chandler adopted twin girls.

Monica and Chandler had originally planned on adopting one child, but what they didn't know, was that the mother was having twins. She ended up giving birth to both a boy and a girl.
15. What scares the bejebus' out of Chandler?

This is something we find out during the trivia game. The question is to Monica and Rachel and they answer it correctly. Joey was very surprised that Chandler was afraid of the Irish jig guy.
Source: Author Shoerel1188 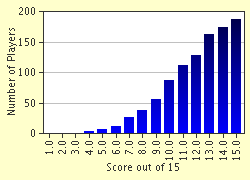 
Other Destinations
Explore Other Quizzes by Shoerel1188