There are lots of TV shows that have classic episodes or moments that last in our memories for years. Let's see if you recognize these ones!

Quiz Answer Key and Fun Facts
1. When a clown dies in a parade, it's no laughing matter - Unless you're at the funeral.

Poor Mary chastises everyone for laughing when Chuckles the Clown, dressed like a peanut for the parade, gets "shelled" by an elephant. But at least they got it out of their systems before the funeral - unlike Mary!
2. A celebrity loses his briefcase in a taxi. When he retrieves it, he winds up surprising the taxi driver with a kiss on the cheek - for the camera!


Answer: All in the Family

After Sammy Davis, Jr. leaves his briefcase in Archie Bunker's cab, Sammy comes by the Bunker house to pick it up. As star struck as Archie is, he can't help letting slip his racial views. So when Archie asks for a photograph of the two of them, Sammy gives him a kiss on the cheek just as the camera snaps the shot.
3. An entire episode revolved around an activity that is never named. (Would the censors have allowed that?) Instead, every euphemism ever created is used while the characters discuss a bet.

I'm probably the only person on the planet who couldn't stand "Seinfeld", but I do get a kick out of this episode. Kramer's entrance, slapping the money on the counter because he's lost the bet - that is classic! They called this season four episode "The Contest".
4. A man from the planet Twylo, who has no thumbs and eyes in the back of his head, stalks our hero with walnuts - thankfully only in his dreams.

Rob and Laura watch a late night horror movie, which results in a nightmare of epic proportions. An alien is stealing people's souls, replacing them with the souls of Twylo-ites, who have no thumbs, eyes in the back of the head, love walnuts, and breathe water. Danny Thomas, whose company produced the Dick Van Dyke Show, guest starred as the alien.
5. Working in a chocolate factory seems like a good way to earn a little money. Until you realize that you and your friend can't keep up with the conveyor belt!

Lucy and Ethel shoving chocolates in their mouths and down their clothes - absolutely beautiful!
6. It can be tough to write an episode when an actor leaves a series. This series sent our character off with a new suit and a hot kiss. But he never made it home, to the sorrow of his friends in the operating room.

"Lt. Col. Henry Blake's plane was shot down over the Sea of Japan. It spun in. There were no survivors." When you can quote the line, you know the episode is classic. Or that you've seen this episode too many times!
7. Shortly after this TV appearance, this actor in this show would play a Captain in space. But for now, he's flying in a plane and no one believes what he sees on the wing.

Not long before he became Captain Kirk, William Shatner starred as a man newly released from a mental institution. You can imagine why people didn't believe him when he said he saw something on the wing while they were in flight!
8. A game of touch football is all fun and games until your sister's nose gets broken.

Beautiful Marsha looked a little not-so-beautiful after she walked into a wayward pass! I wonder if Jan secretly rejoiced.
9. I think all of us learned an important lesson - Turkeys don't fly. Especially when you throw them out of a helicopter.

Les Nesman's horrified live commentary gave listeners a vivid description of the poor doomed birds. Not really the way to increase your radio station's ratings!
10. In a mix of real-world and television, the US Vice President, against the advice of his staff, made a moral judgment about the leading character on this series. Crossing the lines of reality even more, the series writers created an episode in response to the event.

VP Dan Quayle tried to argue that Murphy's decision to continue an accidental pregnancy contributed to the de-emphasis of the importance of fathers. His heart was in the right place, but his brain was on pause and his logic was out the window. However, if he'd never made the comment, we wouldn't be able to laugh at him now!
11. Scene: Evening . . . empty offices . . . a man turns and greets someone in surprise . . . shots ring out. And the world hangs on in suspense until the next season.

Who shot JR? Well, at the risk of spoiling it for anyone not living on the planet Earth at the time . . . Kristen did. Forget the American Revolution, I think *this* was the shot heard 'round the world!
12. Man: "Look, I didn't think there was a relationship to jeopardize. I thought we were broken up." Woman: "We were on a break!" Man: "That, for all I knew would, could last forever. That to me is a break-up."

The break idea was Rachel's, but I don't think she realized that Ross would take that to mean, "Go sleep with the girl from the copy shop."
13. "Resistance is futile. You will be assimilated."


Answer: Star Trek: The Next Generation

Jean-Luc Picard assimilated into Locutus of Borg - The greatest cliff-hanger in "Star Trek" history (in my humble opinion). Right after this, Will Riker fires on the Borg cube, trying to destroy his Captain and mentor. Waiting for the next season made for a very long summer!
14. A young boy kills a bird, not realizing that she left behind a nest full of babies. He learns an important lesson by raising the babies, eventually letting them go to live their lives as wild creatures.

Ron Howard was about 9 years old when he filmed this episode, and it was a powerful performance for one so young!
15. A man on water skis jumps over a shark.

Years later, Henry Winkler would again jump over a shark - one of the many fantastic moments that can be found on "Arrested Development." This phrase became synonymous for the moment a hit TV series pulls a desperate act to stay on the air.
Source: Author betterjester 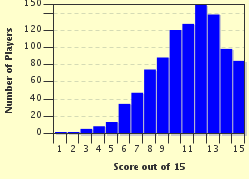 
Other Destinations
Explore Other Quizzes by betterjester