I'll give you a basic idea of the television show, all you have to do is figure out which one I'm talking about.

Quiz Answer Key and Fun Facts
1. This show takes place in California and centers around a boy brought in from the "bad parts" of town. A holiday called Chrismukkah is celebrated.

"The OC", starting in 2003, became a hit with the younger generation. Much like a soap opera, this show is about rich teenagers who have problems fitting in the society of their parents.
2. This series shows a freakish bond between mother and daughter. The mother got pregnant at 16 and separated herself from her parents, moving to a strange town called Stars Hollow.

"Gilmore Girls" starring Lauren Graham and Alexis Bledel as the mother/daughter duo who go through many things a family does: school, boys, and college. This series started in 2000.
3. This show is about a plane that went down after leaving Australia, on its way to Los Angeles. The survivors of the crash have to learn to survive, knowing they were hundreds of miles off course when they crashed.

"Lost", starting in 2004, is a sci-fi "Gilligan's Island", bringing in a monster that only a few have seen. The show has each episode centered on one person and their past, what that person went through before the crash.
4. This show is based on a teenage boy and his family. His best friend helps him get into trouble, while his girlfriend helps him out of it. He lives next door to a teacher he has had all his life, starting in middle school and ending in college.

"Boy Meets World" was one of my favorite TV shows as a kid, and it was on the air from 1993 to 2000. It centered on the family and showed many values that are still talked about today.
5. The show is about a town in Kansas where meteors hit giving the people strange abilities. It also is about the beginnings of Superman.

"Smallville" is about the beginnings of Superman, and how he became the hero we all know. This show started in 2001, and stars Tom Welling as Clark Kent.
6. This show is about three sisters who live in the house their ancestors have owned for generations. They find out that their grandmother, the person who raised them, was not just an ordinary woman and has passed down an interesting story of their family.

"Charmed" is about three witches who have to defend the world from darkness and evil. The show started in 1998 and the original sisters were played by Shannon Doherty, Holly Marie Combs, and Alyssa Milano.
7. This show is about the Seaver family and their children, and them going through different stages of life. The four children consisted of two boys and two girls. The father, being a psychologist, tries to help his kids through life, while the mother is a journalist and helps them in a different perspective.

"Growing Pains", running from 1985 to 1992, was mostly about troublemaker Mike Seaver, played by Kirk Cameron.
8. "Who's the Boss?" is about the relationship between a male housekeeper and his employer.

Running from 1985 to 1993, "Who's the Boss?" stars Tony Danza and Judith Light as the employee and employer. They shared an awkward relationship, which had much to do with the mother Mona Robinson, played by Katherine Helmond.
9. This show is about an astronaut who finds a peculiar object on a deserted island after one of his missions and brings it home. He is surprised to see what comes out of it


Answer: I Dream of Jeannie

"I Dream of Jeannie" is about all the strange situations Jeannie (Barbara Eden) puts Major Nelson (Larry Hagman) through. This show started in 1965 and ended in 1970.
10. "The Brady Bunch" is about a father and his three daughters living with his new wife and her three sons.

"The Brady Bunch" is about a woman and her three girls and a man and his three boys. This is thought to be the original funny family show starting in 1969 and ending in 1974.
Source: Author hpspider 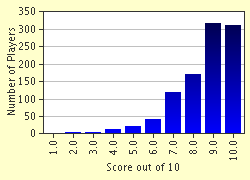 
Other Destinations
Explore Other Quizzes by hpspider