Use the pictures to help you identify the television shows. All of the shows premiered no earlier than 1999.

Quiz Answer Key and Fun Facts
1. Premiering in 2005, this show has an F.B.I. agent and a forensic anthropologist solving some of the most interesting crimes. Check out the picture and figure out the name of the show. What is it?

Although her first love is forensic anthropology, Dr. Temperance Brennan finds herself unwillingly (at first) being lent out to the F.B.I. to solve crimes. With the full weight of the Jeffersonian Institute (a fictional place) behind her, she and her team bring every imaginable sort of expertise into play and the bad guys don't stand a chance. Once she becomes partnered with Special Agent Seeley Booth, an interesting relationship forms, in spite of her lack of the normal social graces.
Brennan is played by Emily Deschanel and Booth is played by David Boreanaz.
2. The teens in this picture are in a show choir, just like the one in this award-winning show that first aired in 2009. What program showcases a group of incredibly talented young people, against the backdrop of high school life?

At McKinley High School, members of the glee club, New Directions, are at the bottom of the pecking order and find themselves subjected to slushy facials and being tossed into dumpsters. Despite all that, and the drama that naturally occurs with teenagers and hormones, the kids' talent drives them to excellence.

It's a show that I find myself enjoying in spite of initial low expectations!
3. This whodunit, premiering in 2009, pairs a New York City detective with a popular crime writer to solve crimes. What is the name of the show?

Rick Castle is a very successful crime fiction writer, with a lot of toys and influence at his disposal. Bored with his continuing character, he kills him off and develops a new character, Nikki Heat, based on Detective Kate Beckett. Initially she's not too thrilled with having him tag along, but soon finds that he's good at solving crimes. The romantic tension between them is the basis for a lot of the humour in the show.
Nathan Fillion plays Rick Castle and Stana Katic plays Kate Beckett.
4. This 2004 HBO series is set in a real frontier town, in South Dakota, during the late 1800s. Although much of the series is fictional, it does encompass some real wild west characters during its three seasons. Believe it or not, if you look carefully at the photo, you will get a clue as to the name of the show. What was it?

Deadwood was the town in which Wild Bill Hickok was shot while playing poker, an event immortalised in one of the episodes. The series shows the growth of Deadwood, from nothing more than a camp to a real city, with all the standard amenities of the time. One would hope that the cutthroat behaviour of its inhabitants (with many bodies being fed to a pen of hogs) is exaggerated, but you never know!
5. What action-packed show, premiering in 2001, runs in "real time" for eight seasons, keeping us all on the edges of our seats as Jack manages to resolve the different threats in 'the longest day of his life'?

CTU (Counter Terrorist Unit) agent Jack Bauer manages to avert numerous terrorist attacks on the USA, including one that involves an attack at the White House. Even when CTU is disbanded and Jack is hauled up in front of a congressional enquiry, he is still willing to sacrifice himself for his country.
Each season represents a 24 hour day, with each episode taking an hour. The format works, although it does emphasise just how many minutes in each television hour are given over to commercials!
Kiefer Sutherland plays Jack Bauer.
6. This TV show, which first aired in 1999, is all about the day-to-day activities of the people who worked in this building. What is it called?

For seven seasons, "The West Wing" entertained us with the day-to-day operations and crises facing the staff of the President of the United States. The pressure, the difficult decisions, the long days and the lack of a personal life is examined in a wide range of staff, including the president himself.
The West Wing is the business end of the White House, where the staff have their offices, including the Oval Office.
Martin Sheen plays President Josiah Bartlett.
7. This crime show, which first aired in 2005, is about a team of criminal profilers who concern themselves with scenes such as the one in the picture. What is the name of the show?

Working for the Behavioural Analysis Unit of the FBI, Aaron Hotchner (played by Thomas Gibson) flies his team around the country, in their own private jet, to help local police capture the most twisted and depraved killers. Trying to get into the mind of the killers, they provide behavioural profiles and strive to stay one step ahead, hopefully apprehending the killer before he or she strikes again.
8. The show suggested by this picture is a British-Italian made one that first aired in 2005 and only ran for two seasons. It deals with the rise and fall of Julius Caesar and the fall-out after his death. What is the name of the show?

The first season of "Rome" deals with the rise in power of Julius Caesar, and the jealousies and backstabbing (pun intended) that lead to his eventual assassination. The second season deals primarily with the posturing and battles that occur after Caesar's assassination, as Marc Antony and Octavian struggle to gain leadership.

The lives and fortunes of two Roman soldiers, played by Ray Stevenson and Kevin McKidd, are used as the thread that ties the events in the series together.
9. This show, which first aired in 2005, follows the lives of two brothers whose jobs are to deal with creatures that go bump in the night, such as the one depicted in this photo. What show is this?

Sam and Dean Winchester follow in their father's footsteps and become hunters of vampires, ghosts and demons - all the things we don't believe really exist. Their father started down this road when his wife was murdered by a demon, when Sam was just a baby. That demon had a plan and infested a number of children with his blood, to see which one would survive and lead the hordes from Hell.
Sam is played by Jared Padalecki and Dean is played by Jensen Ackles.
10. Premiering in 2004, this medical drama is named after the lead character, a taciturn doctor who saves a lot of lives that, without his keen eye and insight, would otherwise be lost. What is it called?

Hugh Laurie plays Dr. Gregory House, a doctor with an attitude. However he's a genius when it comes to diagnosing obscure ailments and, while the other people on his team may not always love him, they learn a lot from him. His addiction to pain killers also makes for some interesting subplots.
Source: Author skunkee 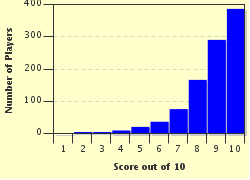