My quiz is about all things "Scrubs", including seasons one-seven. This is for anyone who loves "Scrubs."

Michael J Fox has made guest appearances on "Scrubs". He played the role of Dr. Kevin Casey.
2. What is the name of J.D. and Kim's baby?

This is a fact from the second episode of the seventh season of "Scrubs". This is the episode where J.D. and Kim end their relationship.
3. What was the occupation of Elliot's boyfriend Sean?

Elliot, J.D. and others go to see Sean at one of his Sea World shows.
4. What episode did the Janitor not appear in?

"My Lucky Day" is the only one when Neil Flynn's character of the Janitor did not appear.
5. What happened to Turk when Carla was going for her C-section?


Answer: His hand got stuck in an ice machine

This is where we find out how Leonard the security guard got his hook.
6. Where does Dr. Cox look for change for parking meters?

He checks Jack's diaper because he eats change.
7. In the episode "My Life in Four Cameras" J.D. and Turk meet a writer from what show?

They get to meet the writer from "Cheers". They bring him upstairs to talk to him and he ends up having cancer.
8. What was J.D.'s father's occupation?

J.D. and his brother talk about his dad's business and how they could never find supplies around the house.
9. What happened to Carla's sister before Carla and Turk's wedding?

Elliot accidentally waxes off an entire eyebrow because she was mad at J.D. She was mad at him for telling her that he did not love her and made her end her relationship with Sean for him.
10. Who had postpartum depression in the sixth season?

Carla had postpartum depression after she had Isabella. We also learn that Jordan had this after she had Jack.
Source: Author snowborder226 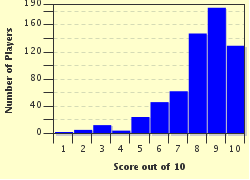 
Other Destinations
Explore Other Quizzes by snowborder226