This is a quiz about the eighth season of "Scrubs." Enjoy!

Quiz Answer Key and Fun Facts
1. In "My Comedy Show," Jimmy the overly touchy orderly does impressions of Owen Wilson, Jack Black, and Brad Pitt. Who else did he do an impression of?

JD said that he and Turk could put Jimmy in any sketch that wasn't funny like the Dr. Winn sketch. Jimmy overdid it, though.
2. What is JD's nickname for Denise?

JD thought she reminded him of Jo from "Facts of Life." Denise replied, "It's just a little butch, I like bangin' dudes."
3. What new physical feature did JD have at the beginning of season 8?

Dr. Cox thought that this was great because more of JD's face was covered.
4. Which character becomes pregnant for the second time?

We first learn this in "My Absence." Turk spends his time trying to get a enthusiastic reaction from someone. He lies and says its his first child to Gooch, Ted's girlfriend so that she'll be excited for him.
5. Who becomes the official Chief of Medicine in "My Cookie Pants"?

Cox finally accepts the job after Kelso encourages Cox to take it by calling him a "sackless fraidy cat."
6. In "My Lawyer's in Love," what instrument does Stephanie Gooch play?

She plays for the patients in pediatrics. Ted falls in love with her when he first hears her sing.
7. Who said this- "Janice, you have one ugly baby seriously"?

Jack says it to JD on behalf of his dad, Cox. JD says to Sam, "They can both be so hurtful."
8. Who does JD start dating during the middle of the season?

"I Will Folllow You into the Dark" is written by Death Cab for Cutie. It is on their album "Plans."
10. Who is Dr. Cox's new best friend in season 8? 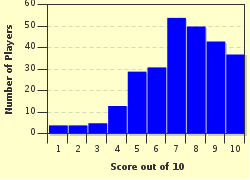 
Other Destinations
Explore Other Quizzes by Lizzardcheer