Hopefully these questions are a bit more relaxed than my previous quizes.

Quiz Answer Key and Fun Facts
1. In 1970, Buick offered its potent Skylark GSX available with the Stage 1 455 cubic inch motor. Only 2 colors were offered by Buick for this car in 1970. What were they?

Other colors were available from 1971 on. This car is an animal with the Stage One 455 motor. Ask any Hemi owner.
2. If I raced a 1970 Yenko "Deuce" through the quarter mile in 12.98 seconds, what kind of Chevrolet would I be driving?

The Super Bee sold fairly well, but with a six month lead, Plymouth had already captured the public's imagination with the Road Runner.
4. In 1967, you could order a Coronet R/T from your friendly Dodge dealer. It came standard with the 440 ci motor and the only other engine option was the venerable 426 Hemi. What does R/T stand for?

Nothing under a 440 or Hemi available in the early R/T Dodge's.
5. Introduced mid-decade, this second generation Chevrolet big block motor was designed to replace the antiquated 348 & 409 big blocks from previous years. What year did Chevrolet introduce this new big block engine, starting off at 396 cubic inches?

The Corvair is not a Muscle car per se, but if Don Yenko re-engineered it and it devlops 240 hp in a 2500lb. car, it's pretty close.
7. In 1969 you could order a Mustang Mach 1 from your favorite Ford dealership with a 428 SCJ motor. What does SCJ stand for?

Heavier connecting rods and forged pistons were just some of the major differences between the SCJ 428 and the CJ 428.
8. This Ford car, introduced mid-year in 1964, sold like wildfire and had the rest of the Detroit automakers scrambling to play catch up. A whole automobile category was named after this one car because of its huge impact. Name the original "pony car".

I know you got this one right.
Yeah, I hear you MOPAR guys, the Barracuda was first by a few weeks, but it wasn't the car that the rest of Detroit was trying to copy in sales and styling. Camaro was the first real contender in 1967.
9. In 1969, AMC and Hurst Performance modified a limited number of AMX's for NHRA Super Stock drag racing. Name this 11-second Rambler sold only through your friendly AMC dealer. Available if you were lucky enough to get one of the 52 made.

Shirley "Drag-On-Lady" raced one with much success in 1969.
10. Even though it is purely subjective, this car is often chosen in polls as the vintage muscle car enthusiast's most respected Detroit built muscle machine. With 454 cubic inches and 450 factory horsepower driven through a Muncie "Rock Crusher" 4-speed and into a 4:10, 12 bolt rear end, this 1970 Chevrolet should make any gearhead Stand at attention and Salute. 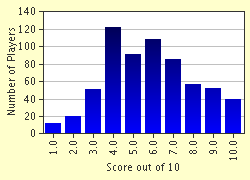