In the 1960s and 70s, the Detroit auto manufacturer's graced their muscular cars with a variety of visual and performance gee-gaws giving them a "hip" advertising terminology. I'll give you the option's "far-out" name, you pick the option.

Quiz Answer Key and Fun Facts
1. If a '69 Chevelle SS had a "Rock Crusher" installed, what GM option would I be able to figuratively crush rocks with?

The Muncie M22 extra heavy duty, close ratio, 4-speed transmission. The "Rock Crusher" was usually an extra cost option while the Muncie M20 was the GM muscle car 4-speed standard.
2. My 428 CJ Mach 1 has the optional "Drag Pack". What all is included in this option?

A vacuum operated pop-up hood scoop available on the GTX and Road Runner. It had a set of shark teeth that were visible when it was in use.
4. A "Go Pack" could be ordered on a '68-'74 AMX. What's included in this factory option?

Available, mostly, on the AMX and Javelin. This package includes, front disc brakes, Redline or RW letter tires, heavy duty suspension, "Twin Grip" rear end, heavy duty radiator, and stripes.
5. You are usually the center of attention if your 'Cuda is decked out with the "High Impact" option. What is it?

Even more eye crossing paint courtesy of American Motors, seen mostly on AMX's and Javelins. Paint job included the bumpers on '69 models.
7. This "Six-Pack" will only slur your speech if you push too hard on your Dodge's gas pedal. What do you get if you ordered a "Six-Pack" for your 1970 Challenger R/T 440?

Available on the T/A Challenger 340 and Dodge 440 "Magnum" motors.
Plymouth called their X3 deuce setup "Six-Barrel".
8. "Cowl Induction" was a popular option on many Chevelle SS's and Z28 Camaros. Do you know what "Cowl Induction" is?

Used on the '70-'72 Chevelle SS with a vacuum flapper, and the '69 Z28 Camaro but sans "Cowl Induction" metal nameplate.
Also used by AMC on the production '71-'74 Javelin/ AMX's, brought over by Mark Donohue from his T/A Camaro racing days. Really.
9. You won't get sugar from this kind of "Shaker" but if your 1970 'Cuda is factory-equipped with this $97 option, it makes it a much sweeter car. What's this sort of "Shaker"?

Cool "shaker" scoops jiggle when the motor is running. First seen on Ford's Mach 1 Mustangs, and Torino GT's in '69. Plymouth followed on their 'Cuda's then Pontiac on their T/A's, LeMans Can-Am, and 74 GTO.
10. It seems fitting that the 1969 Plymouth Road Runner would have been factory fitted with the "Coyote Duster" as standard equipment. Unfortunately, it cost extra to have your Road Runner able to dust off coyotes. What all was included in the "Coyote Duster" option?

Standard with the Hemi, optional with a 383 or 440 equipped Plymouth in 1969.
The vent in the Road Runner's and GTX's hood bulges were opened up and air was directed into the sealed "Coyote Duster" air cleaner.
Source: Author machineamc 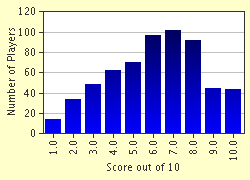