I'll give you the slogan, you pick which product the slogan was or is for.

Quiz Answer Key and Fun Facts
1. "A little dab'll do ya".

This is what men used to style their hair with before the invention of gel and mousse.
2. "You're soaking in it".

This line was uttered by Madge, the manicurist, who starred in a series of commercials for Palmolive.
3. "I can't believe I ate the whole thing".

Another famous slogan for alka seltzer is "plop, plop, fizz, fizz, oh what a relief it is!"
4. What US candy was advertised with the slogan "Melts in your mouth ... not in your hands"?

M&Ms come in plain, peanut, crunchy, peanut butter, and almond. In the UK, the same slogan advertised a sweet called Minstrels.
5. "The choice of a new generation".

This slogan is based on the sound Rice Krispies make when you pour milk on them.
7. "You'll wonder where the yellow went".

"You'll wonder where the yellow went when you brush your teeth with pepsodent!"
8. "Hand picked by Juan Valdez"

In the commercial Mr. Valdez (and his burro) spent most of his time walking up and down the aisles of grocery stores - not picking coffee beans!
9. "Have it your way".

This slogan refers to the large rock that features prominently in the corporate logo of Prudential Life Insurance.
Source: Author Marvo301 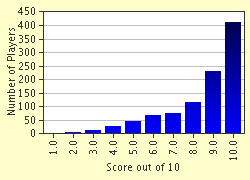 
Other Destinations
Explore Other Quizzes by Marvo301