Answer: Unibody structure with a seperate subframe in the front.

The first generation Camaro had a unibody structure from the windshield and firewall back, with a separate steel rail subframe for everything up front. Double A-arms made up the independent front suspension while the solid rear axle was suspended by semi-elliptical leaf springs.
The Modified MacPherson strut system, with a long torque arm and coil springs was used in the third generation Camaros (1982-1992).
2. Let's say you own a 1967 Camaro RS equipped with a 327 cubic inch small block V-8. What is the correct firing order for your engine?

The 1967 Pace Car was a 396 big-block car.
Later, in 1969, Chevy produced its second Camaro Indianapolis 500 pace car and offered replicas of the white RS/SS convertible with orange stripes and orange houndstooth upholstery to the public (the actual pace car was powered by a 396, but most of the replicas had 350s).
5. Some of the rarest Camaros are referred to as "COPOs". What does COPO stand for?

Lots of different Chevrolet models were available as COPOs, including the Camaro, Chevelle, and Nova.
6. One of the rarest first-generation Camaros was "COPO 9560". It featured the legendary all-aluminum ZL-1 427 c.i. V-8, conservatively estimated at 425 horsepower. How many of these were produced?

Only 69 of the ZL-1s were built, and because of their rarity, tremendous output and relatively low weight, they are today considered the quickest and most valuable Camaros ever built.
In 1969, you could purchase a brand-new Nova SS for about the same price as just the ZL-1 engine by itself!
7. What was the starting price for a base model 1967 Camaro sport coupe before any options or accessories were added to it?

Wish new cars were still that price today!
8. How many different AUTOMATIC transmissions were available for the first-generation Camaros?

The two automatic transmission choices were the two-speed PowerGlide and the three-speed TurboHydraMatic.
9. Almost every first-generation Camaro has stripes of some kind along the body. Some even had stripes around the nose of the car. What were these "nose stripes" (included with the SS package) more commonly known as?

"Bumblebee Stripes" was especially fitting for a yellow Camaro with the stripes in black!
10. What were the two main design design changes between the 1967 and 1968 model-years?


Answer: The side vent wing windows were eliminated, and side-marker lights were added.

Thanks to "Astro Ventilation," General Motors eliminated the side vent wing windows on the 1968 Camaro and also added federally mandated side marker lights. Mechanically, the most significant change was the adoption of staggered rear shocks (one in front of the rear axle, one behind) to counteract wheel hop under hard acceleration.
The 1967 Camaro is the only Camaro that had a triangular vent window.
Source: Author vandychris 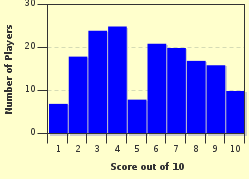 
Other Destinations
Explore Other Quizzes by vandychris