Can you translate into English these lists of synonyms in many different languages?

Quiz Answer Key and Fun Facts
1. In English, what is the meaning of perro, hund, cachorro, cane and chien?

Perro is the Spanish word for dog, as is hund in Swedish, cachorro in Portuguese, cane in Italian and chien in French. It would make better etymological sense if the English word for dog was hund, from the old Germanic languages. Exactly how the Old English docga became the Modern English word for a canine in unclear.

The title of the 1962 Italian film "Mondo cane" literally means "A Dog's World" but figuratively is an expletive.
2. In English, what do cipele, boty, chaussures, kurpes, sko, obuwie, esgidiau and kasut mean?

Cipele means shoes in Bosnian, as does boty in Czech, chaussures in French, kurpes in Latvian, sko in Norwegian, obuwie in Polish, esgidiau in Welsh and kasut in Malay. The Old English scoh is related to the Dutch schoen and the German Schuh, which are related to the Old Norse skor, the Danish and Swedish sko and the Gothic skoh.
3. What do bolacha, kaka, galleta, ciastko, koekje and Plätzchen mean in English?

Bolacha is Portuguese for cookie, as is kaka in Swedish, galleta in Spanish, ciastko in Polish, koekje in Dutch and Plätzchen in German. The English word cookie descends from the Dutch koekje (meaning little cake), a diminutive of koek (meaning cake). Koke descended from the Middle English koke (also meaning cake).
4. What is the English meaning of farvel, au revoir, addio, sudie, la revedere and macsalaamo?

Farvel means goodbye in Danish, as does au revoir in French, addio in Italian, sudie in Lithuanian, la revedere in Romanian and macsalaamo in Somali. As an English salutation when taking leave, goodbye is a contraction of "God be with ye" from the 14th Century. The French au revoir has the literal sense of "until we see each other again" as does the Romanian la revedere.
5. Can you translate trappe, portaat, escalier, scala, escada, schodisko and merdiven into English?

Trappe means stairway in Danish, as does portaat in Finnish, escalier in French, scala in Italian, escada in Portuguese, schodisko in Slovak and merdiven in Turkish. The English term stairway first appears as a compound noun in 1767 and thereafter, a combination of stair and way. Stair is much older, descending from the Old English staeger, the Middle Dutch stegher and perhaps the Greek steikhein.
6. What is the English translation of equus, kabayo, hest, cheval, Pferd, hestur and konj?

Equo is Latin for horse, as is kabayo in Filipino, hest in Danish, cheval in French, Pferd in German, hestur in Icelandic and konj in Slovenian.
A horse is a mammal in the family Equidć and the genus Equus. The English word derives from the Old English hors, the Proto-Germanic hursa, and related words. The phrase "the horse's mouth" arose in racetrack parlance, with probable reference to counting a horse's teeth to determine its age.
7. In English, what is the meaning of dugme, knoop, nappi, bouton, Taste, pulsante and mygtukas?

Dugme means button in Croatian, as does knoop in Dutch, nappi in Finnish, bouton in French, Taste in German, pulsante in Italian and mygtukas in Lithuanian. The English noun "button" entered English around the 13th Century from the Old French to describe a bouton (meaning a bud) which passed through a hole in a garment to hold its parts together. The expression for a boxer striking another on the point of the chin (the button) arose in the 1920s.
8. In English, what do petull, Krofna, bunyol, Krapfen, ciambella, spurga and rosquinha mean?

Petull is the Albanian word for doughnut, as is Krofna in Bosnian, bunyol in Catalan, Krapfen in German, ciambella in Italian, spurga in Lithuanian and rosquinha in Portuguese. The English word doughnut (also donut) is a compound noun made up of dough and nut. It was used in 1809 to describe a ball of bread dough deep-fried in pork fat. American author Washington Irving mentions them.
9. What do shtrat, ohea, seng, voodi, lit, letto and cama mean in English?

Shtrat means bed in Albanian, as does ohea in Basque, seng in Danish, voodi in Estonian, lit in French, letto in Italian and cama in Spanish. The Old English bedd was simplified to bed in Modern English. The sources were the Old Saxon bed, the Middle Dutch bedde, the Old High German betti, and the Gothic badi.
10. What is the English meaning of zjarr, tulekahju, feu, Feuer, fuoco, fogo and fuego?

The Albanian noun zjarr means fire, as does tulekahju in Estonian, feu in French, Feuer in German, fuoco in Italian, fogo in Portuguese and fuego in Spanish. The Modern English noun fire descended from the Old English fyr which was related to the Old Saxon fiur, the Old Norse furr, and the Old High German fiur.
Source: Author FatherSteve 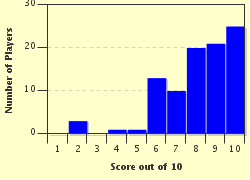 Related Quizzes
This quiz is part of series The Tower of Babel:

How well can you identify, from a list of synonyms in many languages, the correct English word? Polyglots welcome here!