There are 200 - 300 words in English and German that look alike but don't mean the same. These are the famous "False Friends". I've picked out a few, so here we go ...

Quiz Answer Key and Fun Facts
1. The most famous one: "bekommen" in German does not mean "to become". What does it mean?


Answer: to get, to receive, to have

"Bekommen" (bekommt - bekam - hat bekommen) = to get, to receive, to have; to become = "werden" (wird - wurde - ist geworden). That's why a German native speaker might say in a restaurant "Can I become a steak?" instead of "I'd like to have a steak". You might even get the reply: "Never, I hope!" Pretty funny thing :)
2. Also a very popular one: "sensibel" does not mean "sensible" but what?

"Sensibel" = sensitive; sensible = "vernuenftig, sinnvoll". That's a really tricky one - I mixed these two up until I was about 14. You might come across a German saying things like "Your words didn't hurt me, I'm not that sensible".
3. Another example: "sympathisch" is *not* the German word for "sympathetic". Which, then, is the correct word for the English?

"Sympathisch" = nice, pleasant, friendly; sympathetic = "verstaendnisvoll, mitfuehlend". Though this one is tricky, it doesn't cause as many misunderstandings as others, as a nice person mostly is also sympathetic.
4. German "Formular" and English "formula" are also likely to be mixed up. What is the correct German word for "formula"?

"Formular" (das Formular - pl. die Formulare) = form; formula = "Formel" (die Formel - pl die Formeln), e.g. "eine chemische Formel" = a chemical formula. And yes, "Formula 1" is "Formel 1" in German. Incidentally, note "das Schema" (pl. die Schemata) - "scheme, outline" with its intruiguing, Grecian plural.
5. A rather morbid one that has often caused much confusion is the difference between German "Unternehmer" and English "undertaker". What is an undertaker known as in German?

"Gültig" = valid; guilty = "schuldig". If you hear someone say "My passport is guilty until September 2003", this person is most likely a German who wonders why everyone starts to laugh :)

"Gültig" can also be spelled "gueltig". Umlauts (ä, ö, ü) can always be converted to a non-diacritical format (ae, oe, ue) if the actual umlaut is not available, e.g. on an English keyboard.
7. "Eventuell" and "eventually" - mixing these two is very popular. They don't mean the same. What is the correct English word for "eventuell"?

"Eventuell" = perhaps, possibly; eventually = "schliesslich, letzten Endes". Not as funny as others, but still likely to cause confusion.
(Note the English "in the eventuality of ..." - which may help you).
8. There's a "Gymnasium" in German and a "gymnasium" in English. Yet these two are different things. What is a German "Gymnasium"?

You can't really translate "Gymnasium" (das Gymnasium - pl. die Gymnasien) into English, as there's no real equivalent in the public sector in most of Britain due to the different school systems. You need to attend a Gymnasium in order to pass your Abitur (das Abitur or formerly "das Abiturium" - which is now archaic), the kind of graduation you need if you want to go to university.

The English gymnasium means "Turnhalle, Sporthalle" in German. You might say that every Gymnasium has a gymnasium :) "Kindergarten" (der Kindergarten - pl. die Kindergaerten) is a German word anyway, I hope you didn't choose that!
9. "Aktuell" is not "actual". How would the English word 'actual' be translated into German?

"Aktuell" = current, latest; actual = "eigentlich". If a German talks about "the actual news" he or she probably means the latest news.
10. "My meaning is the following..." - that's what a German native speaker might say to his boss. Of course, what he wanted to say was something different. Which German word did he falsely translate as "meaning"?

Of course, he should have said was "my opinion is the following...". "Meinung" (Die Meinung - pl. die Meinungen) = opinion; meaning = "Bedeutung". The other multiple choice possibilities are complete nonsense in this context :) However, for the sake of completeness; "die Mine" (pl. Minen) is the kind of mine that explodes and also a pit; "die Miene" (pl. Mienen) means "look(s) on a person's face" and "die Minne" (no pl.) means "love" in the context of medieval German poetry.
Source: Author PearlQ19 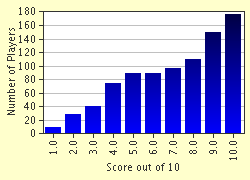 
Other Destinations
Explore Other Quizzes by PearlQ19